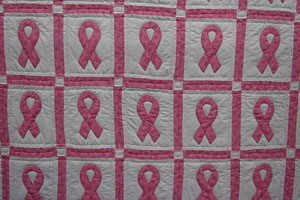 Photo used under a Creative Commons license by flickr user <a href="http://www.flickr.com/photos/merfam/" target="_blank">merfam</a>

Has feminism been replaced by the pink-ribbon breast cancer cult? When the House of Representatives passed the Stupak amendment, which would take abortion rights away even from women who have private insurance, the female response ranged from muted to inaudible.

A few weeks later, when the United States Preventive Services Task Force recommended that regular screening mammography not start until age 50, all hell broke loose. Sheryl Crow, Whoopi Goldberg, and Olivia Newton-John raised their voices in protest; a few dozen non-boldface women picketed the Department of Health and Human Services.  If you didn’t look too closely, it almost seemed as if the women’s health movement of the 1970s and 1980s had returned in full force.

Never mind that Dr. Susan Love, author of what the New York Times dubbed “the bible for women with breast cancer,” endorses the new guidelines along with leading women’s health groups like Breast Cancer Action, the National Breast Cancer Coalition, and the National Women’s Health Network (NWHN). For years, these groups have been warning about the excessive use of screening mammography in the US, which carries its own dangers and leads to no detectible lowering of breast cancer mortality relative to less mammogram-happy nations.

Nonetheless, on CNN last week, we had the unsettling spectacle of NWHN director and noted women’s health advocate Cindy Pearson speaking out for the new guidelines, while ordinary women lined up to attribute their survival from the disease to mammography. Once upon a time, grassroots women challenged the establishment by figuratively burning their bras. Now, in some masochistic perversion of feminism, they are raising their voices to yell, “Squeeze our tits!”

When the Stupak anti-choice amendment passed, and so entered the health reform bill, no congressional representative stood up on the floor of the House to recount how access to abortion had saved her life or her family’s well-being. And where were the tea-baggers when we needed them? If anything represents the true danger of “government involvement” in health care, it’s a health reform bill that – if the Senate enacts something similar—will snatch away all but the wealthiest women’s right to choose.

It’s not just that abortion is deemed a morally trickier issue than mammography. To some extent, pink-ribbon culture has replaced feminism as a focus of female identity and solidarity. When a corporation wants to signal that it’s “woman friendly,” what does it do?  It stamps a pink ribbon on its widget and proclaims that some miniscule portion of the profits will go to breast cancer research. I’ve even seen a bottle of Shiraz called “Hope” with a pink ribbon on its label, but no information, alas, on how much you have to drink to achieve the promised effect. When Laura Bush traveled to Saudi Arabia in 2007, what grave issue did she take up with the locals? Not women’s rights (to drive, to go outside without a man, etc.), but “breast cancer awareness.” In the post-feminist United States, issues like rape, domestic violence, and unwanted pregnancy seem to be too edgy for much public discussion, but breast cancer is all apple pie.

So welcome to the Women’s Movement 2.0: Instead of the proud female symbol—a circle on top of a cross—we have a droopy ribbon. Instead of embracing the full spectrum of human colors—black, brown, red, yellow, and white—we stick to princess pink. While we used to march in protest against sexist laws and practices, now we race or walk “for the cure.” And while we once sought full “consciousness” of all that oppresses us, now we’re content to achieve “awareness,” which has come to mean one thing—dutifully baring our breasts for the annual mammogram.

Look, the issue here isn’t health-care costs. If the current levels of screening mammography demonstrably saved lives, I would say go for it, and damn the expense. But the numbers are increasingly insistent: Routine mammographic screening of women under 50 does not reduce breast cancer mortality in that group, nor do older women necessarily need an annual mammogram. In fact, the whole dogma about “early detection” is shaky, as Susan Love reminds us:  the idea has been to catch cancers early, when they’re still small, but some tiny cancers are viciously aggressive, and some large ones aren’t going anywhere.

One response to the new guidelines has been that numbers don’t matter—only individuals do—and if just one life is saved, that’s good enough. So OK, let me cite my own individual experience. In 2000, at the age of 59, I was diagnosed with Stage II breast cancer on the basis of one dubious mammogram followed by a really bad one, followed by a biopsy.  Maybe I should be grateful that the cancer was detected in time, but the truth is, I’m not sure whether these mammograms detected the tumor or, along with many earlier ones, contributed to it: One known environmental cause of breast cancer is radiation, in amounts easily accumulated through regular mammography.

And why was I bothering with this mammogram in the first place? I had long ago made the decision not to spend my golden years undergoing cancer surveillance, but I wanted to get my Hormone Replacement Therapy (HRT) prescription renewed, and the nurse practitioner wouldn’t do that without a fresh mammogram.

As for the HRT, I was taking it because I had been convinced, by the prevailing medical propaganda, that HRT helps prevent heart disease and Alzheimer’s. In 2002, we found out that HRT is itself a risk factor for breast cancer (as well as being ineffective at warding off heart disease and Alzheimer’s), but we didn’t know that in 2000. So did I get breast cancer because of the HRT—and possibly because of the mammograms themselves—or did HRT lead to the detection of a cancer I would have gotten anyway?

I don’t know, but I do know that that biopsy was followed by the worst six months of my life, spent bald and barfing my way through chemotherapy. This is what’s at stake here: Not only the possibility that some women may die because their cancers go undetected, but that many others will lose months or years of their lives to debilitating and possibly unnecessary treatments.

You don’t have to be suffering from “chemobrain” (chemotherapy-induced cognitive decline) to discern evil, iatrogenic, profit-driven forces at work here.  In a recent column on the new guidelines, patient-advocate Naomi Freundlich raises the possibility that “entrenched interests—in screening, surgery, chemotherapy and other treatments associated with diagnosing more and more cancers—are impeding scientific evidence.” I am particularly suspicious of the oncologists, who saw their incomes soar starting in the late 80s when they began administering and selling chemotherapy drugs themselves in their ghastly, pink-themed, “chemotherapy suites.” Mammograms recruit women into chemotherapy, and of course, the pink-ribbon cult recruits women into mammography.

What we really need is a new women’s health movement, one that’s sharp and skeptical enough to ask all the hard questions: What are the environmental (or possibly life-style) causes of the breast cancer epidemic? Why are existing treatments like chemotherapy so toxic and heavy-handed? And, if the old narrative of cancer’s progression from “early” to “late” stages no longer holds, what is the course of this disease (or diseases)? What we don’t need, no matter how pretty and pink, is a ladies’ auxiliary to the cancer-industrial complex.