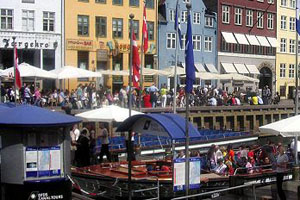 COPENHAGEN—There was no calm before the storm. At least not over the last few days, not in Copenhagen. The climate change conference begins for real this Monday morning, but the deluge—of information, of people, of noise of all sorts—swept into the city days ago.

Downtown, the wide sidewalks are jammed. Visitors ascend to street level at the central train station, rolling suitcases and opening maps. In bars and restaurants—I noticed this more once a bartender pointed it out—foreigners stare blankly at the Danish coins in their hands and try to figure out how much they’re paying.

Aside from the permanent medley of neon signs—this city might be quaint, but it’s commercialized too—climate-related posters and banners are everywhere. Most advertise Hopenhagen LIVE, a package of concerts, educational pavilions, and a giant illuminated globe in the City Hall Square (the event must have a serious advertising budget). There are posters too for climate-related rallies, concerts, expos, and art exhibits. And booklets, pamphlets, leaflets—whatever—stacked in abundance. The ubiquitous public climate-change art seems designed to provide inspiration or moral orientation. But there’s so much of it that it sort of runs together. 100 Places to Remember Before They Disappear, an outdoor photo exhibit at Kongens Nytorv square, is stunning, but I don’t know how many delegates will take the time to visit installations such as this.

A completely separate event, the Klimaforum09/Peoples Climate Summit offers a 48-page guide to its sessions. The Summit, which skews toward the down-with-capitalism crowd, will unfold at a posh downtown sports venue. According to the U.K. Telegraph, Copenhagen “officials” hope that the venue’s climbing wall, swimming pool, and bowling alley will keep the radicals engaged downtown so the grownups at the U.N. conference can stay focused. (One group has threatened to break into the main conference site and “take over” for a day.)

At that main conference site, Copenhagen’s Bella Center on the edge of the city, still more crowds gathered. On Sunday afternoon, an unattended suitcase led police to close entry and exit points and call in a bomb squad. The situation proved harmless, but it kept a crowd of delegates, NGO representatives, and media members waiting in the cold for about an hour.

Around the same time, organizers announced that the center was running into “capacity constraints”—34,000 people want to attend and the space holds only 15,000. The announcement introduced a quota system for NGOs and  the press; only 3,500 media members would be allowed. I’ll find out Monday morning exactly how conference organizers plan to handle this and other last-minute issues. Like whether to merge the AWG-LCA and AWG-KP negotiating tracks.

I haven’t mentioned the policy jargon. AWG-LCA stands for Ad Hoc Working Group on Long-Term Cooperative Acion; AWG-KP is the Ad Hoc Working Group on Further Commitments for Annex Parties Under the Kyoto Protocol. Then there’s the MRV—measurement, reporting, and verification goals. You get the point—it’s a busy, confusing place, even before the conference begins.

Anyone who signed up to negotiate, or lobby negotiators, or report on them, should know by now that the climate problem is fraught with complexity, and so is the conference convening to address it. Nobody said this would be simple. I can’t help but wonder how folks will find a measure of clarity amid the noise.

This story was reported for Grist as part of the Copenhagen News Collaborative, a cooperative project of several independent news organizations. Check out the constantly updated feed here. Mother Jones’ comprehensive Copenhagen coverage is here, and our special climate change package is here.