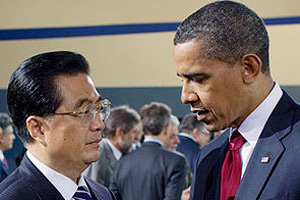 The slight prospects for a deal at Copenhagen are already being pinned largely on the US and China. But with Obama’s hands tied behind his back partly by the US Congress, with China already demonstrating leadership on renewable energy and energy efficiency efforts, and with both the developing and developed world hanging on Beijing’s every word, the success or failure of Copenhagen will in large part depend upon China.

In a sense, Copenhagen isn’t just about agreeing to agree on future carbon cuts or aid and technology transfer to developing countries. It’s about how countries position themselves to lead the dialog going forward. Now’s China’s chance to shine, and we have to hope that it will.

The crucial role that China can play at Copenhagen hasn’t been lost on China’s negotiators or leaders. For decades they led a country notorious for its flagrant disregard for the environment, and with deep suspicion of foreign opinions. But for a handful of years, starting mainly with the awarding of the Beijing Olympics in 2001, China’s government has grown determined to show the world it’s cleaning up. And not just because it looks good. A cleaner environment will make real money, and prevent the social and political fallout that could come with continued environmental disaster.

Not surprisingly, China sees Copenhagen as its best opportunity yet at illustrating its commitments to the environment. If environmental controls were once at odds with the government’s sense of self-determination and confidence, such controls are now becoming firmly part of that sense of power.

If climate change was once an excuse for the first world to (quite hypocrtically) tell China how to behave, now it’s seen as a chance for China to show the rest of the world how to behave. To borrow Al Gore’s (somewhat mistaken) formulation about the word ?? weiji, the country that once looked like a paragon of crisis now exudes opportunity. And China’s leaders, masters of both pragmatism and propaganda, may recognize that better than anyone.

Whatever the outcome may be of the climate negotiations — and between China’s and the US’s still modest carbon targets, much remains to be done — the best overall result of Copenhagen will be a China that’s more confident than ever on the world stage. Combined with the country’s booming economic and political (to say nothing of military) power, that kind of confidence is a great asset to both Beijing and the rest of the world. Whether you’re talking about renewable energy or currency policy or political freedoms, the last thing anyone needs is a big important and strong country with a chip on its shoulder. That sense of insecurity only serves to isolate, antagonize and estrange — and turn global concerns like climate change into merely political sore spots.

The dangers of China’s historical inferiority complex were summarized in a great article last year by Orville Schell in the New York Review of Books. Schell, head of the Asia Society’s center on US-China relations, describes the ways in which a national narrative of humiliation has served the power interests of China’s leaders, at the often untold expense of its people. The country’s “century of humiliation” was the subtext of the nasty international back-and-forth that ensued following the riots in Tibet last year, he observes, and of its vigorous and somewhat ugly reach for the most gold medals at the Beijing Olympics.

To be sure, China had much to be proud of as a nation at the glorious opening ceremony. And yet, as Schell quotes Xu Guoqi, author of Olympic Dreams: China And Sports, 1895-2008, “Through their coverage and handling of the Beijing torch relay, the West seemed to remind the Chinese they were still not equal and they were still not good enough.”

But climate change — once a bitterly divisive issue between China and the west — could ferry China and all of us out of this narrative. At a meeting at the Asia Society recently about US-China cooperation over carbon capture (US pays, China builds, both sides benefit), I heard Schell invoke a new vision of China:

China’s rise has been accompanied by America’s decline. This does have one very good effect: for the first time in 150 years, we find this Sino-US relation playing field, which used to be like this – [he held his hand diagonally] in terms of pop culture, politics, soft power — more like this [hand horizontal]. But this new leveling means we will cofront each other with new equality… The Chinese strength, its new confidence, and a level playing field, comes with a prospect for a better relationship.

A better relationship will be crucial on all fronts, not least the climate one. For all the competitiveness of a global low carbon economy, climate change is ultimately not a zero-sum game. Like China, it’s a crisis that could be an opportunity. By increasingly putting pragmatism before propaganda, Beijing is showing it recognizes that. If it can locate the leadership to get the developing world to follow suit, and enter into cooperation with the developed world with a greater sense of confidence, China will shed its status as the world’s environmental villain. That would inspire even greater confidence in the future among both African leaders and US senators.

If China assumes the role it’s earned at Copenhagen, for perhaps the first time on the world stage, it can demonstrate the great responsibility that comes with its great power. In doing so, it would be remaking much more than its image.

This story was reported for Treehugger as part of the Copenhagen News Collaborative, a cooperative project of several independent news organizations. Check out the constantly updated feed here. Mother Jones’ comprehensive Copenhagen coverage is here, and our special climate change package is here.