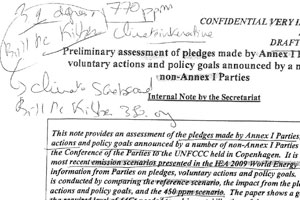 For two weeks we’ve been listening to the story of the leaked emails from the University of East Anglia—a media tempest in an English teapot. And all the time the biggest scandal has been directly under our noses.

This afternoon at Copenhagen a document mysteriously leaked from the UN Secretariat. It was first reported from the Guardian, and by the time it was posted online it oddly had my name scrawled all across the top—I don’t know why, because I didn’t leak it.

My suspicion, though, is because it confirms something I’ve been writing for weeks. The cuts in emissions that countries are proposing here are nowhere near good enough to meet even their remarkably weak target of limiting temperature rise to two degrees Celsius. In fact, says the UN in this leaked report, the  cuts on offer now produce a rise of at least three degrees, and a CO2 concentration of at least 550 ppm, not the 350 scientists say we need, or even the weak 450 that the US supposedly supports.

In other words, this entire conference is an elaborate sham, where the organizers have known all along that they’re heading for a very different world than the one they’re supposedly creating. It’s intellectual dishonesty of a very high order, and with very high consequences. And it’s probably come too late to derail the stage management—tomorrow Barack Obama will piously intone that he’s committed to a two degree temperature target. But he isn’t—and now he can’t even say it with a straight face.