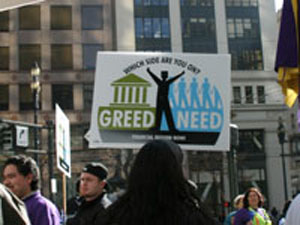 This morning, more than 60 janitors, security guards, window cleaners, and other working folks marched in front of Wells Fargo’s San Francisco offices to protest the $150 billion in bonuses, benefits, and compensation the six largest banks in the US are giving executives this year. The SEIU-organized protest comes just days after Wells Fargo and Citibank announced they’d be repaying the last of their TARP funds, and in doing so, avoid government scrutiny on executive pay and risk assessment. Though the TARP funds (plus interest) are on their way to government coffers, it’s not enough for working people of California, who continue to be outraged at record bank bonuses. Down at Wells Fargo HQ, the anger was hand-written on signs reading “Bank of America: You’re Overdrawn,” “Arrest those Bank Robbers,” and “Theft is Theft! Throw Banksters in Jail!”

“This is your money,” said Marvin Webb, a minster at Richmond’s Bethlehem Missionary Baptist Church, to the crowd. “This is money we invested, this is money we deposited, this is money that they’re using to pay for bonuses.” The money doesn’t just go to pay bonuses, it pays mortgage middlemen to foreclose on properties still undergoing loan modification. Gina Gates, who spoke at the event, said she took her money out of Bank of America after they foreclosed on her home, despite the fact she was willing to pay off the balance left on her mortgage. “If they can’t take care of our money, why are we giving it to them?” she asked.

Here’s what some other attendees had to say:

“What we’re trying to do is build an economy that works for working people and not for Wall Street bankers. [In the Senate reform bill] We encourage improving transparency and looking at risk and performance, so that if you do crash the economy you’re not rewarded for that.” –Rachele Huennekens, SEIU

“I’m a member of the working class. You don’t give loans to people who cannot afford to pay you back. This should be illegal and it must have been before deregulation. Americans have this get rich quick mentality, and they’ve got to learn that class struggle comes first. Get rich quick doesn’t work.” –Name withheld, works at nearby law firm.