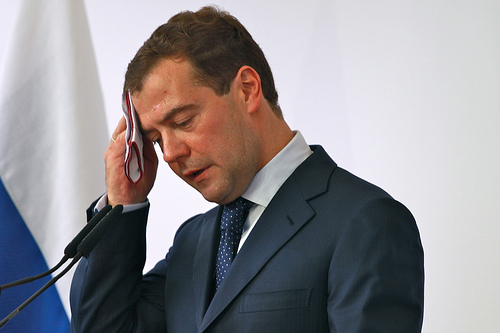 Frustrated with his lack of political power (and the fact that no one in the western media will ever refer to him without mentioning Vladimir Vladimirovich Putin in the same breath) Russian President Dmitry Medvedev has decided to do something drastic. Peter the Great invented the civil service. V.I. Lenin streamlined the Cyrillic alphabet; the man who has so far distinguished himself as an attractive and well mannered sock puppet will singlehandedly take on Russian time.

Russia currently has eleven time zones, a number Medvedev would like to see slashed by two-thirds. If his rather ambitious plan succeeds, only four will survive.

As surreal as it sounds, there’s actually a long history of time-tampering in world politics. China has just one time zone (though until 1949 it had five) making it the largest country in the world where everybody still eats dinner at the same time. Two years earlier, India and Pakistan separated themselves by half an hour (because heaven forbid it be the same time in Delhi and Lahore). Wedged between superpowers India and China, Nepal finds itself fifteen minutes ahead of the former and an hour and 15 behind the latter.

Throw in Daylight Savings Time and things get weirder still. Most countries in Asia and Africa don’t observe it. Europe, North America and the Middle East generally do. Perhaps strangest of all is the row DST has stirred up in Iran, where President Ahmedinejad banned it in 2006, only to be overruled the following year by his parliament (DST was reinstated in 2008). Only time will tell whether it remains.