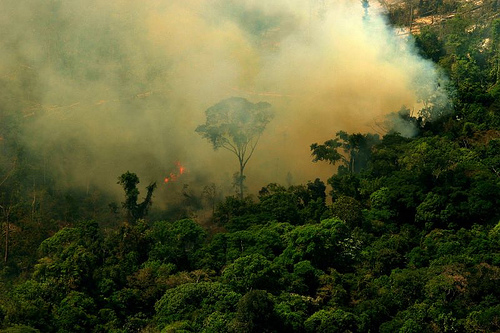 Brazilian President Luiz Inacio Lula da Silva earlier this month announced that Brazil will cut its deforestation rate by 80 percent by 2020, a move he said would reduce the country’s carbon dioxide emissions by 4.8 billion tonnes. That’s significant, especially given that Brazil is one of the biggest contributors to the 20 percent (pdf) of the world’s carbon emissions that come from deforestation, according to the UN Framework Convention on Climate Change.

But what effect will reducing deforestation have on Brazil’s indigenous population? As Mark Schapiro reports in our Climate Countdown issue, green initiatives often put undue strain on the indigenous population. Witness Brazil’s Atlantic Forest, where General Motors, American Electric Power, and Chevron bought 50,000 acres of rainforest to use as collateral toward massive tax breaks. Schapiro writes:

Jonas de Souza is a 33-year-old farmer who grew up a quarter of a mile from the forest that is now part of the GM-funded Cachoeira reserve. His family grows bananas, cocoa, and coffee on a small plot. He remembers hunting for small prey—roast paca, a large rodent, is a local delicacy—and collecting seeds and hearts of palm. But now, signs have gone up at the edge of the forest: No hunting, fishing, or removal of vegetation. A state police force, the Força Verde, or Green Police, patrols the three reserves, as well as a larger state-sanctioned preservation area, to enforce the restrictions.

Read the article and watch this video by PBS’ Frontline World, whose team traveled with Schapiro, for more about GM’s carbon trading ploy and hear the stories of how people with some of the world’s smallest carbon footprints are being displaced at the behest of corporations with some of the largest.