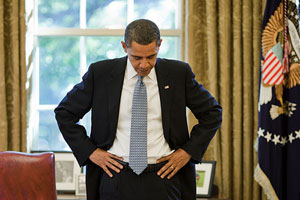 Despite all the town hall protests, the astroturf campaigns and the hysterical talk of death panels, Democrats made history on Saturday night when their health care bill passed the House by a nail-biting margin of 220-215. But while Republicans may have lost this battle, they continue to draw blood in the larger war. And that doesn’t bode well for prospects of  health care reform now that the action is moving on to the Senate.

One after another, GOP members of Congress on Saturday denounced the Democratic health care plan as a socialistic plot that will bankrupt the country. Many also blamed Democratic policies for rising unemployment and other problems caused by the recession. It’s the height of gall, of course, for the Republicans to lay any of our economic woes at the feet of the current administration. The frenzy of deregulation and speculation that has left a reported 10 percent of Americans jobless (with the real unemployment figure running over 17 percent) can be traced directly to conservative policies, which got a leg-up during the Clinton years and flourished under Bush. So why can’t the Democrats seem to fight back? In part, perhaps, it’s because they aren’t willing to engage in the kind of brazen, incendiary lying that’s become de rigeur within the GOP. But there are other reasons as well.

I know the prevailing opinon among the mainstream punditocracy is that Obama is in trouble because he is trying to do too much, too fast. I think it’s the other way around. The Democrats are vulnerable to conservative attacks because they have no compelling message of their own to offer—certainly nothing that matches the soaring rhetoric of the Obama campaign. Instead, they tiptoe cautiously down the middle of the road, and wonder why no one feels terribly inspired to follow them.

The health care legislation is Exhibit A for this problem. When Obama adressed the Democratic caucus on the Hill on the day of the vote, they reportedly responded with “scattered chants of ‘fired up, ready to go.” But fired up is exactly what reform supporters are not. There’s nothing in the bill to inspire any fervor on the left to rival the tea parties. In fact, Republicans are partly right when they say the leading proposals won’t do much of anything but run up the deficit. The reason for this is not, as they claim, because it’s a socialistic big-government plot to take over the private medical system; the reason is that it isn’t any of those things—not by a long shot. The Democratic legislation is a costly, futile mess because it refuses to rein in the industries that have been ripping off the American public year after year.

Obama and the Democrats have no real vision for a transformed health care system, so they’ve gone for a slightly modified version of business as usual. They’ve cut backroom deals that win a few meager concessions toward the public good, while at the same time ensuring the profits of the insurance companies, Big Pharma, and other health care profiteers by entrenching their control of the health care system and rewarding them with larger markets and fatter profits. They’re doing what Democrats have done since at least the Clinton years—acting like kinder, gentler Republicans rather than the defenders of the common people.

A whole lot of Americans don’t like the current health care system, and a whole lot more hate insurance companies. The Democrats should have been able to translate that into some kind of populist support for real change. Instead, they dithered and compromised, and failed to invoke any compelling ideology. Health care ought to have nothing to do with profits or even with “affordability.” It should be a basic human right in a civilized society. But that’s precisely the kind of statement the Democrats are unwilling to make—so they end up saying nothing at all.

Likewise, the Obama White House has yet to take any strong, principled action against the forces responsible for wrecking the economy. And how could it, since it is staffed by the old Clinton economic team that helped to set the financial debacle in motion a decade ago? The key to the economic mess was the decision to rip down Glass-Steagall, the act that separated Wall Street from commercial banking. One of the men at the center of that endeavor was Larry Summers. And where is Larry Summers today? Ensconsed in the White House, running the Obama economic program.

There was a time, shortly after Obama took office, when a rising populist rage at Wall Street greed might have been harnassed to fuel some genuinely meaningful regulatory action. Instead, with men like Summers and Tim Geithner at the helm, we’ve seen Wall Street recover while Main Street continues to suffer. We’ve seen a large portion of the stimulus funds chanelled through the private sector, where they’ve yet to trickle down to the people who need help most. Obama says his goal is for every American who wants a job to have one. So why not start creating government-funded jobs, as FDR did in the early years of the Depression? Why not launch federal projects to create a new green energy industry, instead of waiting for the energy monopolies to come up with a way of making a killing off it?

Obama was elected because people took him seriously when he promised real change. So why won’t he take bold action on any of these fronts? Is it because if he did, the Republicans would abandon him and crush his dream of bipartisanship? Or because he doesn’t want the Democratic party to lose electoral ground? Or because he’s afraid of being branded a crazy maniacal socialist? Oh wait—all those things have happened already. So what does the president have to lose? If he’s going to be called a radical when he’s acting like a timid moderate, why not be a little more radical (or mildly progressive, even) in service of the public good? Then he might actually bring about some change we could believe in.