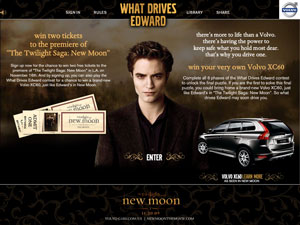 By now, the Twilight marketing team has made it clear that “creepy protectionist vampire stalker” is a winning theme that can apply to all sorts of products.

Twihards can cuddle up under a cozy Edward duvet cover emblazoned with the romantic line: “What choice have I? I can not be without you, but I will not destroy your soul.”

They can wear the rather worrisome bracelet inscribed, “I’d rather die than be with anyone but you.” (Luckily, it’s rubber, so the words will rub off about the time you move on to your next cultural obsession.)

Or they can buy the unofficial (but officially paternalist) life-size Edward wall decal to loom over them with the reminder to “Be Safe.”

But Stephenie Meyer didn’t need a marketing team to flood the market. She managed to make the Twilight series itself a product placement extravaganza. And thanks to the Cullens’ centuries of compound interest and their obsession with automobiles, it was only a matter of time until we graduated to high ticket items, which means Volvos are now cool.

Volvos? Yes, Volvos. And not in the “I’m packing up the family wagon that I’ve converted to bio-diesel so I can drive it to the Ivy League to major in Environmental Sciences with a minor in Folklore” kind of cool. Suddenly Volvo is marketing station wagons to the swooning teenage masses—or maybe their parents.

The tag line (mysteriously absent of capitalization) manages to turn what has long been the standard of sensible automobile reliability into full on Shakespearean romantic protectionism:

“there’s more to life than a Volvo. there’s having the power to keep safe what you hold most dear. that’s why you drive one.”

Of course you have to have a valid driver’s license and be a legal adult to win the super studly station-wagon, so there is hope that this may actually be aimed at the parents of fans, or those fans of parenting age, which makes the campaign a little less cringe-worthy. After all, we hope all parents want to keep their kids safe. Which is far better than making sure that fans who want to get closer to their favorite sparkly vampire by endangering themselves (let’s hope that’s not the only thing readers take away from New Moon) will be doing so in a car with a high safety rating.

But that leaves this 30-year-old reader with one question: How long will it be until the marketing division starts to capitalize on the characters that try to instill some agency in our heroine, and Porsche gives away Alice’s 911 Turbo?