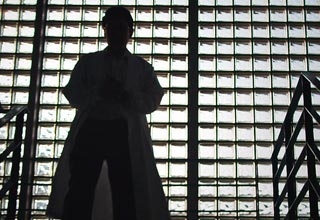 Most tea party protests against health care reform feature a standard cast of characters. Revolution-era patriots in greatcoats and tricorne hats; LaRouchies handing out pictures of Obama with a Hitler mustache; the people with the giant fetus signs; and some guy dressed as an actual tea bag. Then, there are the doctors. Real doctors. They wear white coats and they look respectable. And many of them come from a group with a respectable-sounding name—the Association of American Physicians and Surgeons.

As tea partiers have become the leading opposition to health care reform, AAPS has lent credibility to their criticism of the emerging health care legislation. Before the big 9/12 rally in Washington, AAPS cosponsored a protest on Capitol Hill with the Tea Party Patriots that AAPS says attracted 1,000 physicians. The organization’s president, Mark Kellen, appeared with Georgia representatives Tom Price and Phil Gingrey—GOP members of the congressional doctors’ caucus—to slam the bill.

Yet despite the lab coats and the official-sounding name, the docs of the AAPS are hardly part of mainstream medical society. Think Glenn Beck with an MD. The group (which did not return calls for comment for this story) has been around since 1943. Some of its former leaders were John Birchers, and its political philosophy comes straight out of Ayn Rand. Its general counsel is Andrew Schlafly, son of the legendary conservative activist Phyllis. The AAPS statement of principles declares that it is “evil” and “immoral” for physicians to participate in Medicare and Medicaid, and its journal is a repository for quackery. Its website features claims that tobacco taxes harm public health and electronic medical records are a form of “data control” like that employed by the East German secret police. An article on the AAPS website speculated that Barack Obama may have won the presidency by hypnotizing voters, especially cohorts known to be susceptible to “neurolinguistic programming”—that is, according to the writer, young people, educated people, and possibly Jews.

For decades the AAPS has opposed any attempt—real or imagined—to expand the government’s role in health care. Its last big moment in the spotlight came in 1993, when it sued Hillary Clinton to stop “socialized medicine,” prompting a trial court to order the then first lady to disclose the participants of her health care task force. The organization requires members to sign a “declaration of independence” agreeing to stop participating with any third-party payers—meaning not only government programs like Medicare, but private insurers, too. Basically AAPS doctors believe that medicine should be a cash-and-carry business.

This free-market fundamentalism has made the AAPS a natural ally for big corporations. Documents released as a result of the tobacco litigation the 1990s and early 2000s show that Philip Morris officials worked with AAPS executive director Jane Orient to help the company’s “junk science” campaign that attacked indoor smoking bans. The tobacco company also relied on AAPS to generate “third party press releases” in support of its agenda, according to documents in the tobacco archives. In this fall’s edition of the Journal of American Physicians and Surgeons, an economist who has previously received funding from Philip Morris wrote an article arguing that a tobacco tax “leads to deterioration in public health”—because it leads people to switch to cigarettes with more nicotine so they can smoke fewer of them.

For the AAPS journal, however, this is tame stuff. The publication’s archives present a kind of alternate-universe scientific world, in which abortion causes breast cancer and vaccines cause autism, but HIV does not cause AIDS. Cutting carbon emissions represents a grave threat to global health (because environmental regulation would make people poorer and, consequently, sicker). In 2005, the journal erroneously claimed that illegal immigration had caused a leprosy epidemic in the US, a claim that was reported as fact in more mainstream outlets such as Lou Dobbs’ show.

Much like its friends in the tea-party movement, AAPS sees threats to liberty lurking everywhere. The organization opposes some of the most accepted practices in health care, including mandatory vaccine regulations. Peer review, a long-standing hospital practice that helps doctors learn from and prevent errors, is viewed as the source of great injustice by AAPS, which fights attempts to micromanage doctors with such bureaucratic nuisances as medical evidence about what works and what doesn’t. Computers, too, are an ominous threat. The organization has resisted the use of electronic medical records—which, naturally, represents an attempt by the government to acquire masses of private information about American citizens. (AAPS’ executive director claims to keep all her patient notes in longhand.)

Once in a while, an AAPS member has let slip that their opposition to health care reform doesn’t stem purely from medical concerns. In July, Florida neurosurgeon and AAPS member David McKalip circulated on a tea-party listserv a photo of Obama dressed in Papua New Guinean tribal garb with a bone through his nose, captioned “Obamacare: Coming soon to a clinic near you.” News of the photo, first reported by Talking Points Memo, forced McKalip to apologize publicly and step down as president-elect of the Pinellas County Medical Association. He claimed afterward that he would stay out of politics for a while, but a few weeks later, he spoke at a tea party in south Florida and, on October 16, appeared on the Glenn Beck show with another AAPS member for a special on health care reform.

The tea-party movement has given AAPS—a fringe operation for most of its recent history—a much needed shot in the arm. News reports put the group’s membership at about 4,000 members and it had annual revenue of barely $760,000 in 2008, according to its tax filings. By comparison, the AMA has 236,000 members and revenue of $290 million. AAPS’s California chapter was apparently all but dormant until it was revived in time to kick off the Tea Party Express tour in San Diego last month.

AAPS has assumed such a prominent role in the health care debate because virtually all the other major players—like the insurance industry or the drug companies—have gotten on board with the legislation. As the battle in Washington comes down to the wire, AAPS’s doctors are the last guys standing. And as the saying goes, if this is the opposition, perhaps there really is a chance that health care reform will pass this time.