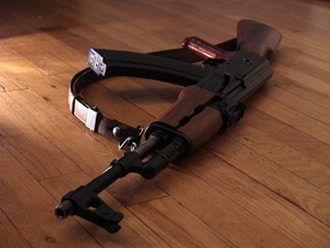 Photo by flickr user barjack used under a Creative Commons license.I was interested to learn, via Spencer Ackerman, that yesterday was AK-47 designer Mikhail Kalashnikov’s 90th birthday. Joe Harlan fills in some details:

The most common assault rifle on earth, being used by children in Africa and old men in Paktia, is the end result of an arms glut never before witnessed in history. The armies of some two to three dozen countries use Kalashnikovs or an unlicensed copy. Armed non state actors on every continent except Antarctica have used it. The production of these weapons is estimated at roughly 100 million units, give or take, and is being copied — by hand in some places, or by industrial manufacturers in others.

[F]or most entities to carry out what we’ll call “industrial” warfare, they require industrial arms production. After WWII, unprecedented levels of production and also proliferation by the two Cold War superpowers changed that; major armored vehicles, artillery, and nearly ubiquitous small arms made their way into the dusty forgotten corners of the world. By allowing that, we have given medieval societies the modern means to make war.

Two years ago Good magazine had an awesome issue about good design. The AK-47 was on the cover. Here’s what they said about it:

The problem is that “good design” didn’t look much beyond the object itself. An AK-47 rifle, for example, makes use of sound and appropriate materials and it demonstrates other criteria of good design, such as solid workmanship, efficiency, and suitability of purpose—the gun was designed so that nothing, from sand to ice, could get in and prevent it from firing. Plus, its robust and “honest” appearance is pleasing. For many, the AK-47 is a classic in the annals of good design (it also happens to be most popular firearm in the world). But the question then is: good for what and for whom?

I know it’s a cliché, but people’s ability to constantly develop with new, more interesting, and more efficient ways to kill each other always impresses me.