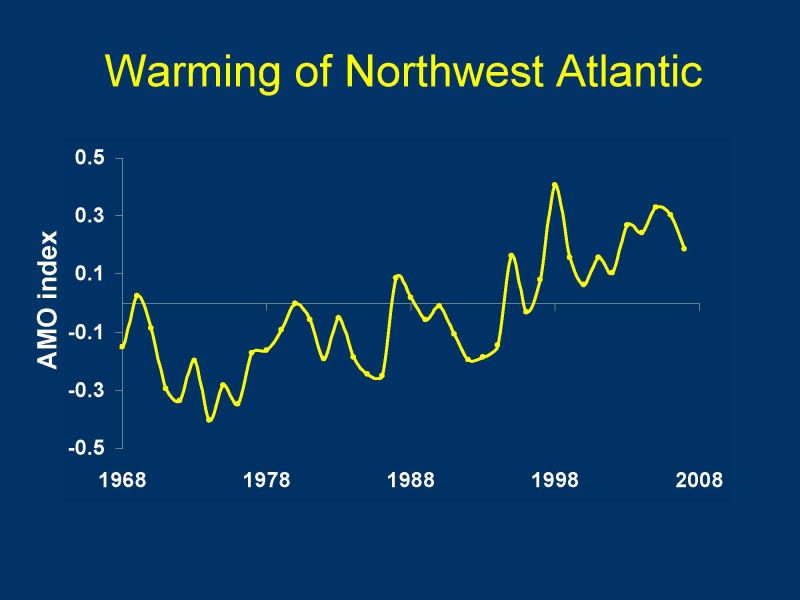 For that 9 percent of Americans who keep flip-flopping on the veracity of global warming, here’s yet another reason to flop to the “aye” column for good.

According to a new NOAA study about half of 36 fish stocks in the Northwest Atlantic have been shifting northward over the last four decades. Some stocks have nearly disappeared from US waters entirely. Southern Species like the Atlantic croaker are becoming common in New England waters.

The shifting stocks include important commercial species, like Atlantic cod, haddock, yellowtail flounder, winter flounder, spiny dogfish, and Atlantic herring. They also include species less important to us but important in the overall scheme of the ocean, like blackbelly rosefish.

The key findings from the paper in Marine Ecology Progress Series:

The researchers analyzed the data in the context of long-term processes (the Atlantic Multidecadal Oscillation and the North Atlantic Oscillation) dating back to 1850, as well in the context of fishing pressures over time. Ocean temperatures have increased since the 1960s (see graph) and the authors found clear evidence of significant changes in species distribution in 24 of the 36 stocks consistent with that warming.

Also of interest: The 36 species were chosen because they have been caught in high numbers in the annual spring bottom trawl survey, and because they represent a wide range of taxonomic groups, and because they’re part of the world’s longest time-series of standardized fishery populations.

In other words, these are solid data giving a solid picture of the effects of warming temperatures on our liquid world. Though I suppose some people are going to be gasping for breath in the bottom of the lifeboat before they believe that.

BTW, the Pew report on the wobbling American attitudes towards climate change is exhaustively parsed and deblogstructed by Tobin Harshaw at the New York Times Opinionator. It’s a fascinating look at the sinew of opinion rubbing up against the T-bones of fact.