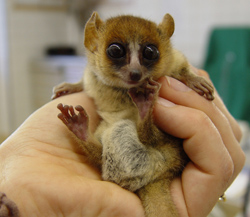 These little “darlings” (as Stephen Fry has called them) are tiny and cute enough that even their big-screen versions, like Mort in Madagascar, aren’t quite as endearing as the real thing. Predictably, mouse lemurs were bred on the highly biodiverse island of Madagascar, home to some of the world’s weirdest, coolest, adorable-ist, and endangered-ist animals. Seventy percent of the animals on Madagascar are found no where else on Earth. The country has dozens of species of lemurs, many of which are endangered due to specialized or restricted habitat on the Texas-sized island of Madagasacar, and the ususal factors: poaching, export as exotic pets, and habitat destruction by logging, agriculture expansion, or human developments. For the mouse lemur specifically, the biggest threats are slash-and-burn agriculture, and predation by carnivores (native and invasive).

The golden-brown mouse lemur, pictured above, is about 10″ long (including tail) and weighs about 1.5 oz. The golden-brown lives only in a nature preserve in northwestern Madagascar and unlike other lemurs, it prefers leaping rather than walking to get around tree canopy. Golden-browns live in groups, though there is no alpha and females are not arranged in the harem system like some primates. Instead, scientists say, these tiny primates prefer a “multifemale” arrangement that results in a “promiscuous mating pattern.” Meaning, these lemurs mate with whomever, and whenever, they feel like it. Group members communicate with one another through olfactory signals, as well as high-pitched vocalizations called “trills” or “chirps.”

Like us, lemurs are omnivores, and eat an array of foods: fruit, flowers, leaves, insects, even small vertebrates. Unlike us, mouse lemurs are nocturnal, thus the huge eyes. During the day, they sleep on tree branches or in nests of leaves they build themselves. Though their big eyes and tiny ears make them “cute” to many humans, mouse lemurs (like most wild animals) do not make good pets. Though relatively tame as youngsters, they turn nasty upon reaching puberty, and are not afraid to bite and attack humans. Females are especially aggressive, as they are the dominant gender in lemur societies. In addition, as an exotic animal, there would likely be few vets who could treat a lemur if it became sick or injured. And not least of all, they’re endangered so it’s illegal to own them. To enjoy them virtually, there are plenty of galleries of lemur pictures online.