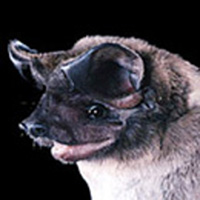 The Florida bonneted bat (Eumops Floridanus) is one of 249 species which are candidates for federal protection under the Endangered Species Act. Since taking office this year, President Obama has only listed one new species (a Hawaiian plant) as endangered, and is scheduled to list another species in December. In contrast, noted conservation foe George W. Bush listed an average of 8 species a year, and Bill Clinton listed an average of 65 species a year. The Florida bonneted bat is currently being reviewed for protection, but it really can’t come fast enough. There are only an estimated 100 individuals left.

The Florida bonneted bat lives only in Florida, and is one of the largest bats in North America, with a wingspan of more than a foot and a half. While its wings are large, the bat’s body is about the size of a sparrow’s: three to four inches long and weighing only one to two ounces. The bat has been spotted in North Fort Myers and in near Miami, roosting in barrel-tile roofs or in the hollow trunks of trees. One of the largest known colonies of the Florida bonneted bat lives in a suburban backyard, first in a single-celled, and now in an upgraded three-chamber bat house built by the Organization for Bat Conservation. The bat house now has more than a dozen bats living in it, including an albino bat born around 2003.

While some Floridians are making a concerted effort to save the bat, its populations have been compromised by pesticide use, which poisons the insects that are the bat’s main food source. In addition, habitat loss continues to be an issue. The bats prefer large, old trees with deep cavities for roosting and rearing young. But many of these trees are removed for various development projects, like one with eight bats in it that was removed back in 1979. Twenty-four species have gone extinct waiting to be listed as endangered. Hopefully, now that it’s actually under review, the Florida bonneted bat won’t be among them.