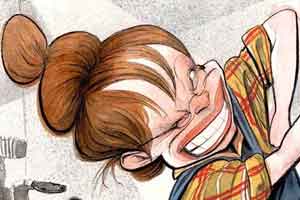 For the last two weeks Sarah Palin has been blitzing the media with her blame-all, victim-athon book tour (my take on her tends toward the extra-toony). It used to be that a candidate who aspired to higher office would struggle to prove her knowledge of issues and ideas on new directions for the country. Instead, in order to solidify her standing with a sector of the boobwazee, she struggles to show how wrapped in paranoia she can be.

It happened…in 1976, when Ronald Reagan battled the incumbent Gerald Ford all the way to the National Convention; and in 1992, when Pat Buchanan harried George H.W. Bush during the primaries and then, in a televised address at the Convention, in Houston, thundered, “There is a religious war going on in this country.” A similar revolt is under way today, though as yet no insurgent tribune has emerged—except, possibly, Sarah Palin. Polls taken last November showed that she had alienated centrists, and a majority of people still eye her with mistrust. But this is beside the point. Populists, from William Jennings Bryan and Huey Long through Joseph McCarthy and George Wallace, have always been divisive and polarizing. Their job is not to win national elections but to carry the torch and inspire the faithful, and this Palin seems poised to do. That she is the first woman to generate populist fervor on such a scale enhances her appeal—and makes her, potentially, a figure of historic consequence.