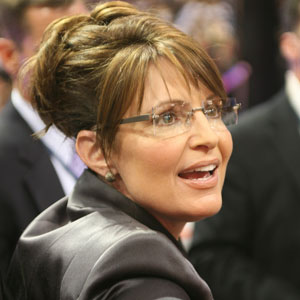 Photo by flickr user <a href="Fourth Assessment Report">NewsHour</a> used under a <a href="http://www.creativecommons.org">Creative Commons</a> license.

When she was running for governor of Alaska in 2006, Sarah Palin reportedly said that even if her then-14-year-old daughter were raped, she would “choose life” and force her to bear a child. Comments like that that have endeared the fiery Alaskan politician to most pro-life voters, who lionized her for not aborting her Down’s Syndrome baby. But Trig isn’t enough to protect Palin from a phalanx of anti-abortion activists who plan to protest her appearance on Thursday to promote her book in the conservative heartland of Indiana. Their reason? They think she’s not really pro-life.

For the Denver-based American Right to Life, when it comes to abortion, Palin is as impure as any godless feminist. “[H]er words and actions prove that she is officially pro-choice and stands against the God-given right to life of the unborn,” they write in a new report. ARTL members plan to educate reporters about Palin’s many alleged failings as a true believer, particularly her March nomination of a former Planned Parenthood board member to the Alaska Supreme Court and her refusal to call for a ban on the morning-after pill.

ARTL has claimed credit for ousting Mitt Romney from the 2008 presidential race by exposing his pro-life “conversion” as a fraud with TV ads in the key primary states of Iowa and South Carolina. The group has grown exponentially over the past two years since it split from the National Right to Life Committee over its belief that the evangelical powerhouse had sold out to the GOP by trading candidate endorsements for thousands of dollars worth of donations from the party.

Palin is emblematic of that compromised relationship, according to ARTL. “The pro-life movement has sunk to such a low level that if you don’t kill your own child you qualify as a leader,” says ARTL spokesman Bob Enyart, referring to Palin’s decision to give birth to Trig.

While it does not condone violence against abortion providers, ARTL may be the nation’s most radical anti-abortion group. It promotes the simple logic that “either abortion is murder or it’s not, and if it is, you don’t support those who’d kill some children,” says Enyart, explaining why they don’t like efforts by more established pro-life groups to simply regulate the practice with such restrictions as the partial-birth abortion ban. ARTL wants abortion to be a crime—and it doesn’t countenance compromise.

As a 527 group, ARTL cannot formally endorse candidates. But as Enyart points out with a chuckle, “We can’t say don’t vote for Mitt Romney, but you can say Romney is the son of the devil and if you vote for him you’ll go to hell.” The group’s president is Brian Rohrbough, who once served as the running mate to hardline conservative presidential contender Alan Keyes. (Rohrbough is perhaps better known for having lost a son in the Columbine massacre.)

One of the organization’s goals is to expose politicians who claim to be pro-life but fall short of supporting anything less than legal rights for the unborn and full criminalization of abortion. ARTL launched a new website this week called Prolife Profiles that prominently features a report calling Palin’s record on abortion “shocking to the conscience.” ARTL has given Palin a “Tier 4” designation that lumps her in with other allegedly fake pro-lifers like Romney, George W. Bush, Supreme Court Justice Antonin Scalia, and Rep. Ron Paul. Tier 4 members “use the pro-life title but deny the personhood and God-given right to life of the unborn.” By that measure, Palin has many strikes against her, according to ARTL, including:

* Her failure to endorse legislation and amendments that would extend equal protection laws to unborn children
* Her description of the morning after pill as contraception rather than an abortifacient
* Palin’s statement to the Anchorage Daily News that she opposes the “use of public funds for elective abortions.” This means, according to ARTL, that Palin supports taxpayer funding for non-elective abortions.

ARL takes particular offense at Palin’s belief that voters and individual states should decide whether abortion should be legal or not. “If you’re personally against slavery but say that the states have the right to decide if they can trade in slaves, then you’re a hypocrite,” explains Enyart.

One of Palin’s biggest violations of pro-life orthodoxy was her political partnership with John McCain, whom the National Right to Life Committee dubbed a “significant threat to future advances by the pro-life movement” back in 2000. (It endorsed him in 2008.) ARTL is also not happy that Palin and McCain supported stem cell research.

The group also blasts Palin for her position that public schools should teach evolution as “an accepted principle” (a belief she seems to have repudiated in her book, according to some leaked reports). This might seem to be a tangent for the group, but Enyart says creationism is central to the abortion issue. “We have the right to life from our creator. If we come from animals, you can kill one another without consequences. A fish can eat another fish and it’s not a crime.”

Enyart notes that ARTL has reserved a “tier one spot” for Palin in their rankings of public figures, provided she meets certain criteria. But he doubts she will ever improve her spot on their list. “When given a choice for a Supreme Court justice in Alaska between a radical environmentalist and a radical pro-abortionist, she prefers the pro-abortionist, which is at the heart and soul of the left,” he said. “If she was given a choice between KKK or PETA, who’s she going to choose?”

UPDATE: Twenty-four hours after ARTL posted its report on Palin’s pro-choice record, her political action committee responded by scrubbing any mention of the Alaska Supreme Court nominee from its website Tuesday.  Read more about it here.