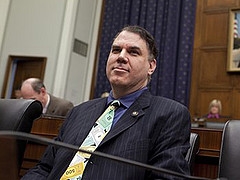 The Dems’ bombastic pit-bull Alan Grayson started a petition (sub req) yesterday urging Senate Majority Leader Harry Reid to lower the Senate’s cloture requirement from 60 votes to 55. Edging dangerously close to his “die quickly” meme, Grayson says that “every day the Senate delays, more people die from lack of health care.” Though this could jumpstart the movement for cloture reform, it’s most likely a non-starter since mid-session rules changes require 67 votes. Still, the petition could draw criticism from conservatives who think Democrats are trying to force Obama’s agenda through congress, and liberals who worry that lifting cloture requirements would backfire when the GOP reclaims control of Congress.

But the suggestion is not unprecedented and most harmed by Grayson’s reputation as a partisan flame thrower. In the mid-1970s, Congress lowered the supermajority of 67 votes to 60. And Ezra Klein writes that liberals should not be worried about weakening the filibuster:

A system governed by the filibuster is a system in which you can’t really do anything, but you can’t undo anything, either. If the Democrats pass health-care reform, but an angry populace throws 12 Democratic senators and 35 Democratic congresspeople out of office, and then impeaches Barack Obama and replaces him with Haley Barbour, nothing will happen to health-care reform. At least, not if the remaining Democrats don’t want anything to happen to health-care reform. That is, on some level, insane: A landslide election is not likely to result in anything close to a ratification of the public’s will.

Whether you agree with Grayson’s proposal or not, it is clear that something needs to change. Kevin Drum writes today that “full-blown unanimous obstruction is something new under the sun…Dems, for better or worse, never tried to make every single bill a destruction test of the opposing party’s governance.”  The filibuster was not consistently abused until the Dems reclaimed control of Congress in 2007.  During the Reagan administration, for example, there were as few as 20 cloture votes per congressional term, compared to more than 100 in the 2007-2008 term, twice what was necessary in the preceding six years.

“If progressives REALLY want to transform America,” a Senate Democratic chief of staff told TPM last week, “they’ll make an issue of the anti-democratic rules of the Senate which make real change virtually impossible.” So Alan Grayson’s long-overdue proposal could pick up some steam. Too bad it was proposed by… Alan Grayson.