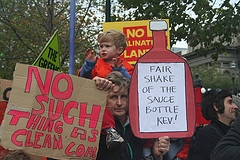 Proponents of clean coal, an umbrella term for all efforts to reduce the environmental impact of our most abundant fossil fuel resource, hail carbon storage and sequestration (CCS) as the best way to get rid of power plants’ carbon emissions for good. In essence, CCS entails rounding up carbon dioxide and keeping it in reservoirs deep below our feet. Unfortunately, It is incredibly expensive, and some scientists have said it could harm plants, animals, and even people if not executed properly.

But the government is moving ahead with its full-fledged embrace of CCS. Last month, the Department of Energy announced that it would allocate nearly $13 million for 43 research projects designed to advance CCS with the help of graduate and undergraduate training programs.

But as Victoria Schlesinger reports for the November/December issue of Mother Jones, some are saying “Not Under My Backyard” to CCS projects. Schlesinger’s story highlights a failed attempt in a small California town of 2,000, that has received significant scrutiny:

“Right at first, you go, ‘Oh my gosh, I don’t want that in my backyard,'” says Marlene Corbitt, secretary of Thornton’s Chamber of Commerce. A special town meeting, held in the elementary school, was organized, and the WESTCARB scientists explained their proposal: to build the storage facility at a site five minutes from town for two weeks, then monitor the structure for two years. The 4,000 tons of CO2 would remain underground for good. The townspeople, recalls Thornton’s fire chief and de facto mayor, Vince Tafuri, were unconvinced. “Even though they said there was no potential danger, I don’t think the community believed that 100 percent.”

Read the story for more about CCS and whether the NUMBY dilemma will derail clean coal’s best hope.