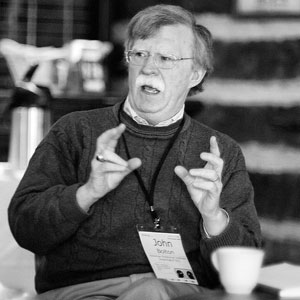 During a little-noticed speech at the University of Chicago on Tuesday, John Bolton suggested a way to resolve the controversy over Iran’s nuclear program: Israel should launch a nuclear attack on Iran. Speaking to the University Republicans and the Chicago Friends of Israel, Bolton, George W. Bush’s hawkish ambassador to the United Nations, said, “Unless Israel is prepared to use nuclear weapons against Iran’s program, Iran will have nuclear weapons in the very near future.” Bolton has repeatedly declared that Iran’s nuclear program is unacceptable. Given that he holds this position, his contention that the only way to prevent a nuclear Iran is with a nuclear attack appears to be a backdoor endorsement of just such a strike.

Daniel Luban—a blogger for The Faster Times and a graduate student at the University of Chicago—first reported Bolton’s remarks. Luban attended and recorded the event and provided Mother Jones with a recording of part of the speech. You can listen to it here (the relevant section starts around 40 seconds in):

Joseph “Tex” Dozier, an organizer of the event, says that when he asked Bolton about the nuclear attack remark after the speech, Bolton told him that he had meant to refer to Israeli military action, not a nuclear strike.  But Bolton did not respond to a request for comment, and his office has not issued any clarification regarding the speech.

This is not the first time that Bolton, a leading neoconservative, has proposed that Israel should attack Iran to prevent it from obtaining a nuclear weapon. But suggesting the use of nuclear weapons—weapons that Israel doesn’t acknowledge it has—is a first. “He’s clearly been in the bomb Iran camp for quite some time, but using nuclear weapons seems to be an escalation from his side,” Trita Parsi, the president of the National Iranian American Council, tells Mother Jones.

Iranian officials are scheduled to meet with diplomats from the United States, France, Russia, and the United Nations on Monday to resume talks about Iran’s nuclear program. Why would Bolton pump up the rhetoric now? Perhaps his aim is to undercut the negotiations. “He has escalated his rhetoric in the midst of diplomacy for the purpose of undermining diplomacy,” Parsi maintains. “Bolton recognizes that diplomacy is not going to lead to an elimination of the Iranian program, it would lead to compromise, and Bolton isn’t interested in compromise.”

Bolton has resorted to cavalier talk about nuclear attacks before. At the annual Conservative Political Action Conference in Washington last February, Bolton joked that President Barack Obama might better understand foreign policy if his hometown of Chicago was destroyed by a nuclear bomb.

Parsi says that Bolton ought to ponder the aftermath of an Israeli nuclear assault on Iran. “There is a day after you use a nuclear weapon,” he says. “If you want to maximize collateral damage and really make sure that the Iranian-Israeli conflict will be another unending Middle-Eastern conflict, then nuclear weapons is your path and John Bolton is your guy.”