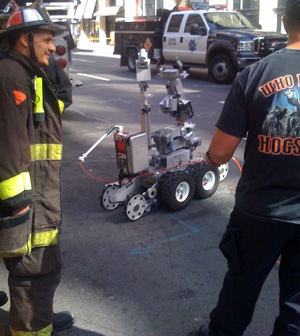 Mother Jones‘s San Francisco office is located right downtown, on a fairly calm street near the financial district. So when I stepped out for my lunch break today, I noticed there was an unusual amount of commotion just a few doors down. As in, three fire engines, a couple dozen police cruisers, tons of yellow tape, and three helicopters hovering above. Some of the surrounding buildings had even been evacuated, but despite this, about 50 other people stood casually on the sidewalk, snapping pictures with iPhones and Blackberries, just 100 feet away from several fully-equipped firefighters.

Curious, I wandered closer and one of the firefighters told me a suspicious looking man had been seen holding a loosely wrapped package very gingerly. The man gently placed the package into a newspaper vending box, closed it, and walked away. San Francisco is famous for its eccentrics, but just to be safe, the San Francisco Bomb Squad used a remote control to move a robot toward the package to X-ray it for any dangerous materials. About 10 minutes later, the firefighters’ walkie-talkies buzzed in unison. They had been informed that nothing was found.

The three helicopters buzzed away and policemen took down the yellow tape, opening the street again. As I walked back to the office, I passed the bomb squad standing around the robot. One of them glanced at me, looking cheerful he didn’t have to deal with a real bomb, and asked if I’d like to take a picture of the hero, “Wall-E”. Naturally, I said yes. Wall-E may not be exactly DARPA material, but hey, the little guy got the street open again in 10 minutes. Maybe they should order a few of him for the TSA.