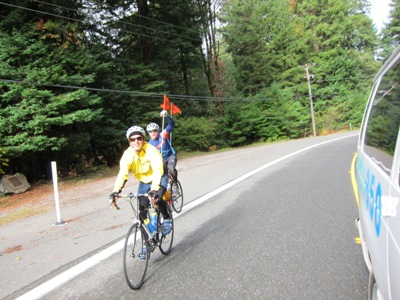 Photo of Zach Dorman and Adam Taylor by Lily Abood

[Guest bloggers Lily Abood, Ben Jervey, and Adam Taylor are writing from the road this week while biking 350 miles to raise awareness of climate change issues. This post is the third in the Mother Jones Ride350 Dispatch series.]

You know the old question: If you could host a dinner party with 3 people, living or dead, from the entire arc of history, who would they be? There was a moment today when I felt as if I were living my answer to that question—except there were 17 guests, and they were all very alive. And they weren’t guests; they were my teammates. And we weren’t eating dinner; we were pedaling through fog-shrouded redwood groves. And we were laughing.

Granted, it’s hard not to smile when you’re enjoying an activity you love in a sublime setting.  Yesterday morning, the satisfaction of being in a community of friends surrounded by a community of very old living trees was enough to elicit a blissful howl from my throat. And considering the mellow roll of the terrain, the meander of the road along the Eel River, it’s not surprising that our mutual sentiment bordered on elation.

Fast forward three hours, when the road had ceased to meander. We found ourselves on a much more direct, not to mention uphill, highway route. Instead of a scenic river we saw 18-wheel logging trucks, and the mist of the ferns were replaced by sweat droplets on baking asphalt. But the team conquered the disappointing change of scenery with good spirits: More laughter was heard over the cacophonous hammer of hydraulic breaks.

Nick and David stopped for 30 minutes to talk to the docent at an interpretive center, only to spend the next ten (yes, it only took them ten) minutes catching up with the pack for lunch. We met a trio of touring bikers from Washington State, each over 60 years old and encouraging us to “keep paying into social security!” They were interested in 350, and at a rest stop under a freeway overpass, we discussed the upcoming negotiations in Copenhagen.

We stopped at the world famous Confusion Hill where the proprietor was kind enough to fill our water bottles. No pressure to buy a flimsy magnet, just service with a smile and a “good luck!” as we continued down the road.

When I finally crested the rise to Standish Hickey State Park, my dad recounted for me the exuberance and exhilaration on the faces of every rider that had arrived prior. And as I dismounted my trusty steed I was greeted with high fives from the 17 that made it to the party.

Ride350 is not a race, but that doesn’t mean that we’re not going to have a darn good time chasing each other up these hills. So although it’s barely dawn and I’ve got 6,000 feet of climbing ahead of me, I can smell my best friend Zach’s percolated coffee brewing, and I look forward to two-wheel traveling for another day. —Adam