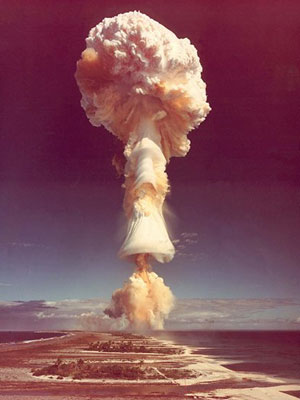 In case you missed it, Politics Daily published a disturbing piece by Walter Shapiro about a new study showing that millions of baby boomers face a greater risk of cancer thanks to Cold War-era nuclear testing.

Shapiro’s piece centers on the startling findings of Joseph Mangano, an epidemiologist who analyzed baby teeth from children born in the St. Louis area of Missouri between 1959 and 1961. He found that subjects who had twice the normal amount of Strontium-90 in their infant teeth had since died of cancer. His detective work eventually traced the Strontium-90 to nuclear test sites hundreds of miles away.

Mangano demonstrated how detonations in the Nevadan desert between 1951 and 1962 propelled radioactive chemicals into the atmosphere, which were then blown all over the country by the wind and returned to the ground by precipitation—infiltrating the water supply, grazing areas for cows, as well as orchards, farms and other sources of food. (Mangano believes the St. Louis children were most likely affected by contaminated cow milk—bottle feeding was in vogue at the time.) Mangano’s explosive findings didn’t receive the reaction you might expect: Shapiro was the only reporter who showed up at the press conference. You can read the entire study here.