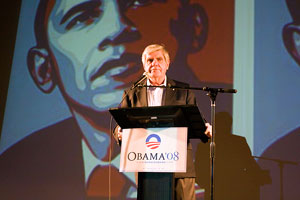 Liberals, prepare to have your hopes crushed. Harry Reid says he’s “close” to getting the sixty votes he needs in the Senate for a health care bill with an “opt-out” public option. But the White House seems to be worried that pushing even this weakened public option might cost them the vote of Sen. Olympia Snowe (R-Maine). If they lose Snowe, conservative Democrats like Sen. Ben Nelson (D-Neb.) and Blanche Lincoln (D-Ark.) might bolt, too. The New Republic‘s Jon Cohn has some good analysis:

[I]t seems pretty clear (at least to me) that Obama really would prefer a strong public option—but that he, like his advisers, has serious concerns over whether such an option can pass. In other words, he wants a good public plan but he wants a bill even more—and he’s not sure that the former is compatible with the latter. So he’s being careful—more careful, in fact, than some of his Senate allies would like.

I think this gets at Obama’s biggest problem in this fight. Everyone knows that he needs to pass a bill. That makes it hard for him to hold out for his preferred solution and gives whoever is standing in the way a whole lot of leverage. The obstructionists have a lot more freedom. It’s really unclear that Ben Nelson, for example, needs the President to like him. If he’s savvy, he’s probably much more interested in paying insurance companies back for the $2 million in campaign cash they’ve given him. The President thinks he needs Ben Nelson more than Ben Nelson thinks he needs the President. That doesn’t bode well for the public option.

UPDATE: David Corn is writing about this, too, over at Politics Daily:

If Reid can indeed keep his 60 votes together on a procedural vote (blocking the filibuster), he can tell Snowe to take a hike. But Obama may still want her Republican cred attached to the final bill. That would place him and Reid dramatically at odds.

I don’t think Obama wants Snowe’s “cred.” He just wants (and needs) a bill, and he has many, many reasons to believe Harry Reid isn’t a strong enough leader to hold Senate Democrats together on a party-line vote. The President thinks he needs a Republican vote to make sure he gets all the Democratic votes. If the past 48 hours have shown us anything, it’s that Obama doesn’t have much faith in Harry Reid—and he has even less faith in conservative Dems like Ben Nelson. The push to get Snowe’s vote isn’t cosmetic (at least I hope not—if it is, the White House had better get its priorities straight). It’s strategic.