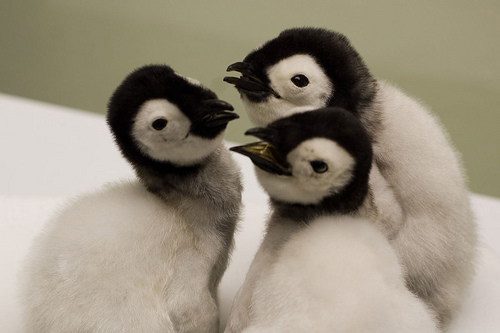 The film March of the Penguins may have done more for the Emperor Penguin than its directors intended. The birds are now bona fide movie stars. But fame comes with a price, and for the Emperor Penguin that’s meant increasing Antarctic tourism. Tourism definitely degrades the penguins’ local ecosystem, but actually it’s just one of many problems the 4′ tall birds face.

Global warming is playing havoc with the penguins’ icy home, melting ice earlier and impacting their delicately timed breeding cycle. Additionally, commercial overfishing has decreased the penguins’ food supply. The birds’ appeal to humans does them some good though: just today, two environmental organizations announced they will file suit against the Department of the Interior if it denies the animals protection under the Endangered Species Act. The groups say the penguins are “marching toward extinction,” and they may have a point.

Ice conditions at Pointe Geologie, where the March of the Penguins was filmed, are deteriorating so badly that scientists have predicted the colony there will decline from 3,000 breeding pairs to just 400 by the end of the century. This would be a tragedy, not just for the Antarctic ecosystem, but for those who love these unique birds. They can stay underwater for 18 minutes. Their feathers are made of keratin and are naturally water-repellent. They can dive to a depth of 1,850 feet in the water. They’re hardy animals, and unafraid of humans. If they only knew what our CO2 was doing to their home, I’m sure our reception would be a lot cooler.