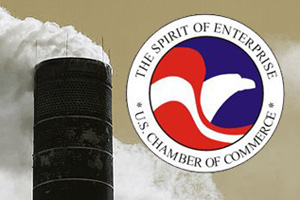 Background photo by Wikimedia Commons user <a href="http://commons.wikimedia.org/wiki/File:Smokestacks_3958.jpg">Dori</a> used under a CC License

Faced with a wave of bad publicity over his organization’s obstructionist role in the climate debate, US Chamber of Commerce president Tom Donohue is fighting back. “We don’t have regrets about our position, and we’re not going to change it,” he told reporters yesterday. The National Journal also published a letter from Donohue in which he told Chamber members that he wasn’t opposed to tackling climate change and urged them to stand united for a business-friendly solution. But many of the claims he and other Chamber officials are making are contradicted by interviews with Chamber board members and its own lobbying record.

Speaking to reporters yesterday, Bruce Josten, the Chamber’s executive vice-president for government affairs, said that its climate policy—which led Nike and Apple to quit the group—came out of its energy and environment committee. But that assertion was flatly contradicted by the committee chair, Donald Sterhan, in an interview with Mother Jones last week. “There was no vote,” Sterhan said, describing the committee’s role. “It’s just a discussion about the concerns, the risks, the potential threats. It was really more of an information discussion.” He added that “there was no action taken” on the committee to approve any of the Chamber’s positions on climate change.

Josten also said that Nike was the only Chamber member to question how its policies were made But according to a spokesman for a company that participated on the Chamber’s energy committee, several companies sought a forum to change the Chamber’s approach and were rebuffed. (He requested that his company not be named because it was concerned about the Chamber’s response to its criticism.) Members of the energy committee that questioned the Chamber’s climate stance “were told that basically this was not the forum to do it,” he says. “There’s basically no outlet for changing the policy.”

In a “President’s Update” sent to the Chamber board on October 2, President Donohue insisted that “the Chamber supports strong policies to address climate change, including comprehensive federal legislation.” But in addition to opposing the climate bills now being debated in Washington, the Chamber has waged a cynical campaign to downplay the impacts of global warming. As Mother Jones‘ Kate Shepard reported on the same day, the Chamber told the EPA that a global temperature increase would “on balance, be beneficial to humans” because fewer people would die during the wintrer. Similar denialist arguments abound in the Chamber’s 86-page filing opposing EPA greenhouse gas regulations.

Donohue often says that the Chamber would support climate regulations if they were international in scope, thereby preventing American businesses from losing their global competitiveness. As evidence of his commitment to the idea, his letter mentioned the Chamber’s role in convincing a group of international business organizations to sign “a strong statement supporting vigorous action to address climate change.” However, that statement, issued on September 22, makes no commitment to support any binding cap on emissions. (A week earlier, 181 investment companies had signed a much stronger agreement calling for a 50 to 85 percent reduction in emissions by 2050).

Donohue wraps up his letter with a swipe at his adversaries, who, he says, “will even resort to personal attacks against those who they see standing in their way.” He might be referring to how the National Resource Defense Council and other groups have questioned his substantial financial ties to the Union Pacific railroad, a major opponent of climate legislation. Donohue may be the only person who knows whether this relationship affects how he steers the Chamber’s climate policy. But given all of the other inconvenient truths he seems to be ignoring, it’s a reasonable question to ask.