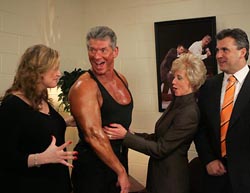 Since former WWE CEO Linda McMahon announced that she will challenge embattled Sen. Chris Dodd for his seat in 2010, a number of highly reputable sources have praised McMahon’s business savvy and professionalism—especially in contrast to her more colorful husband, WWE Chairman Vince McMahon.

Vince is known to be bombastic, egocentric, and a dedicated performer in the ring. [See video of Vince below.] His past antics could become a sore subject in Connecticut, where residents watch wrestling less than voters in other states. Even pro wrestlers have mixed feelings about the duo: “The idea that Vince McMahon could be in the vicinity of one of our lawmaking bodies just frightens me,” says former wrestling announcer Jim Cornette. Jake “The Snake” Roberts, told Impact Wrestling that Linda “was always the steady oar in the water…Anybody that can put up with all the wrestlers and stuff…has certainly got their head screwed on right.” Lanny “The Genius” Poffo agreed, noting to the Daily Beast that McMahon would be a great Senator because “she is the opposite of Nancy Pelosi.”

But while Linda runs on a platform of public transparency, has her husband already displayed too much?