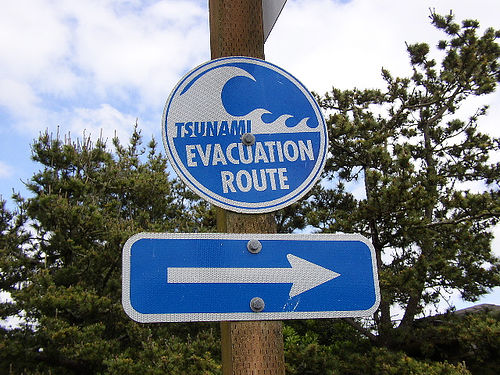 More than 100 people are thought dead in the Samoan Islands after yesterday’s tsunami, and another 75 are already believed to have perished in Indonesia, where thousands are still trapped after a 7.6 quake this morning.  Why was one island devastated by the quake but spared the wave while the other survived the shaking only to watch entire villages swept out to sea? We called the geo-nerds at the United States Geological Survey’s Earthquake Information Center to find out.

According to USGS geophysicist John Bellini, both quakes occurred along the Australian plate, one of the most geologically active areas in the world. At 8.0 and 7.6 respectively, both where huge—though only a fraction of the size of the 9.2 earthquake that caused the 2004 tsunami. The Samoan quake occurred when a piece of the Pacific plate was forced beneath the Australian plate, an event that has enormous tsunami potential.

“That displaces a lot of water,” Bellini explained. “Plus, it was very shallow.”

The Indonesian earthquake was nearly three times as deep, caused when the Australian plate and the Sunda plate nudged past each other at a whopping 65 millimeters per year. Not close enough to cause a tsunami, but strong enough to level much of Padang, a city of 900,000 in West Sumatra.

“The shaking would cause buildings to collapse,” Bellini said. “A cinder block building would just be flat.”

The South Pacific is the beating heart of the infamous “Ring of Fire”, the veined circle of plate boundaries that define the planet’s most seismicly active zones. There, major earthquakes are a fact of life.

“We record big earthquakes there every day,” Bellini said.