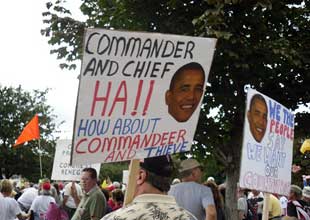 The problem with people who march in protest of big government and taxes is that they never seem to acknowledge just how much they depend on the very government those tax dollars support. Case in point: I spent several hours Saturday attending the big “9/12” march in DC, brought to you by the same people who organized the Tax Day “tea parties” and rowdy health care town hall meetings. Tens of thousands of conservatives and libertarians fanned out across Pennsylvania Avenue and the Capitol lawn, decrying the federal stimulus package, the bailout of Wall Street, and the “czaring” or America.

All that marching and ranting was apparently too much for some folks; several “patriots” suffered medical emergencies and had to be rescued by paramedics—that is, by big government. Or at least local government. Several children also got lost (perhaps because they all seemed to be wearing camo). But the event organizers failed to see the irony in bashing government as the root of all evil one minute and the next, urging little Johnny to find a policeman (and likely stimulus beneficiary) to help him find his mom. (Some in the crowd did suggest people pray for the little tyke, however.)

This kind of disconnect seemed to infuse one of the larger conservative protests in recent memory. What, exactly, did all these protesters want? Who knows? Their message was as muddled as any Starbucks-vandalizing-World Bank protester’s. Some wanted an end to illegal immigration. Others wanted to abolish the auto czar. A few protested “cap and tax” and carried signs suggesting that CO2 emissions came from the sun. One guy carried a poster with photos of Nancy Pelosi, Harry Reid, Ben Bernanke, Obama and others, all wearing Hitler mustaches—in protest of the socialism that was taking over the country. More just seemed to hate Obama generally, along with ACORN and Ted Kennedy. (A popular sign: “Obamacare should die with Ted Kennedy.”)

One clever poster featured Obama with an acorn top on his head, smoking a cigarette, and the caption “poster boy for health care reform.” Many of the speakers, incidentally, dissed Obama for smoking—another incentive, perhaps, for him to kick the habit. But again, without irony, the taunts came from many of the hundreds of people lighting up on the Capitol lawn. Smokers feel especially pinched by high taxes and the crowd seemed full of them—and they weren’t just smoking cigarettes. While liberals can always be counted on to smoke pot at political rallies, patriots seem to prefer cigars. I even saw one guy chewing on a big pipe.

Those same smokers were uniformly incensed that Obama was trying to reform health care, despite the fact that they, and many others at the event, were eventually going to need a fair amount of medical help, if not already. Perhaps it was just all the ambulances, but the tea partiers seemed, on balance, an unhealthy bunch. Not to over-generalize about the attendees, who may have numbered as many as 75,000, but from my vantage point, the people most furious with Obama and health care reform were disproportionately fat, white, and gray. There were a surprising number of sick-looking elderly people in wheelchairs flying flags that read “Don’t tread on me.” I was too chicken to ask any of them what kind of government assistance they were living on.

Event organizers tried to counter the over-50 cast by bringing out a guy from Park Bench Media who made the dubious claim that he’d discovered an underground youth conservative movement in punk bars in Brooklyn. But one of the biggest applause lines I heard came when former House majority leader and FreedomWorks chairman Dick Armey, 69, thundered, “How many of you are here because you love your grandchildren?!”

If the protesters’ message seemed vague, one thing came through loud and clear: The tea party rage stems not from taxes or even Obama, but—no surprise—from the economy. Jeff English came to the march from Williamsport, Pennsylvania, with a female companion who was carrying the smoking Obama poster. Neither of them had ever been to a political rally, and this was their first time to Washington. Williamsport, population 31,000, sent five busloads of people to the march, according to English. I puzzled over this and asked him whether the economy there was in particularly bad shape. English shook his head yes and said ruefully that the paving company he works for has laid off 12 people this year and is down to a skeleton crew.

A quick check reveals that Lycoming County, of which Williamsport is the county seat, has an unemployment rate of 9.2 percent, and the poverty rate is nearly 14 percent. While the county has received at least $14 million in federal stimulus money, which presumably has helped keep those numbers from going a lot higher, it hasn’t trickled down to English. His female companion, who didn’t give her name, said they had come to the march to get the government to “stop spending.”

The role of the recession in this populist uprising was best articulated by a speaker named James Anderer, who managed to briefly hush some “liar!” chants by telling the story of losing his Jeep dealership in Lindenhurst, New York. Anderer has become a folk hero among conservatives and talk radio hosts because GM revoked his franchise as part of the government-forced restructuring. “My business, Highland Jeep, was stolen from me, with no compensation,” he said, blaming the Obama administration for violating his constitutional rights. “Now you see why I am an angry American.” People around me shook their heads in quiet outrage. Well, they did for about 30 seconds. Anderer’s spell was quickly broken by the guy in front of me who yelled, “Obama’s on crack!” Everyone laughed and people went back to wondering when the president would shut down Fox News.