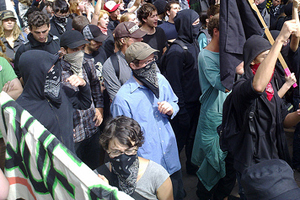 While the leaders of the Group of 20 met in Pittsburgh this week to discuss a climate treaty and banking regulations, a few thousand demonstrators hit the streets to speak out on a variety of issues, from Tibet to trade.

The protests paled in comparison to the 1999 WTO melee in Seattle. But they were notable for their use of technology to organize and raise hell. Organizers compiled a list of potential protest spots on Google Maps. The list was comprised mostly of banks and food chains, including 11 Starbucks locations. (Which once again raises the question: What does breaking windows at big-name retailers have to do with sending a message to world leaders?) Protesters also used Twitter to spread the word. The G20pgh feed, run by the Pittsburgh G-20 Resistance Project, has been particularly active. One tweet from last night read, “RIOT POLICE MARCH DOWN FORBES, SENDING STUDENTS SPRINTING TOWARD TOWERS. TEAR GAS SHOT AT CROWD.” Another: “POLICE JUST PILED OUT OF BUDGET TRUCKS. SOUND CANNONS BEING FIRED AT CROWD. COPS HAVE GAS MASKS ON.” The Resistance Project also boasts more than 750 supporters on Facebook.

No word on whether the police have been keeping track of the protesters’ online efforts. Earlier this week, CNN caught the police response to the protests. The clip below shows a CNN reporter and a group of bystanders getting tear gassed after being warned they’d be arrested or subjected to “riot control agents” if they did not disperse.

Check out the Pittsburgh Post-Gazette‘s G-20 website and and G20pgh for updates as the conference winds down.