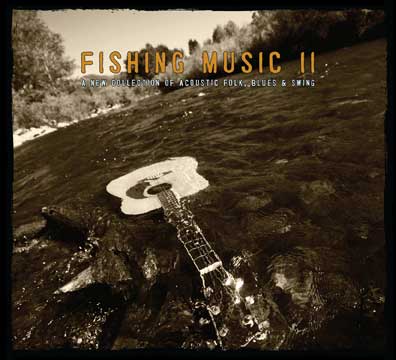 I haven’t listened to Fishing Music I, so you won’t find any comparisons here. But as a kid back in Wisconsin, I regularly scrutinized the Bass Pro Shops catalog and subscribed to a magazine called Fishing Facts. Back then at least, each issue kicked off with a Penthouse Forum-style letters section, except with fish. Typically, you’d get stuff like: “The sun had set and it was growing dark along the fringes of Lake Wingra. I was cold and discouraged; not a strike all day, and so I decided to call it quits. With one desperate last cast, I tossed my #2 Mepps minnow near the end of a submerged pine, and reeled it back, jigging slightly. When all of a sudden a tremendous yank on the line nearly pulled me out of my canoe. My Fenwick superlight nearly snapped in two as the 13-pound, 7-ounce lunker bass took off with my Mepps.” (Cue heavy breathing.)

What were we talking about, again? Oh right, the fishing CD. We’ll get to that. But let me tell you about the iPhone I bought my wife for her birthday. Or rather, I said, “I’m getting you an iPhone for your birthday, but you should set it up how you want it,” so I only bought it for her in the abstract. The point is that she installed a little app called Flick Fishing—weird, since fishing isn’t among her passions. But this thing is a patently addictive little timewaster. You choose a location, pick a lure or bait, make a casting motion with the phone, and when something strikes, you turn a reel on the screen to land it. Sometimes the line snaps or you get an old boot. More often you land a fine-looking specimen with goosed poundage. If you were impressed by that 13-pound, 7-ounce bass from above, a couple weeks back I landed a 19 pounder in the game. “This is so unrealistic!” I complained to Laura, momentarily forgetting my irony detector. “Nobody catches a 19-pound largemouth bass!” (Or maybe I was just using the wrong bait all those years.)

Anyway, for a time, Flick Fishing was being touted as one of the most popular iPhone apps. A fishing game? Geez. Who’d have guessed? So what is it about a fishing game that would capture the imagination of working technophiles? I think maybe it’s that it mimics the sense of anticipation and opportunity you get when you arrive at a fishing hole. And it was with that same sense of excitement that I tore the plastic off Fishing Music II. (Finally, he’s talking about the damn CD!) Well, as it turned out, the album was way more authentic than the game, because I went home better for the experience, but still a bit disappointed. Some pretty good bites on here, sure, but not too many lunkers. Catch and release, mostly.

FM II is the second installment of acoustic folk, blues, and swing from singer/mandolinist Ben Winship and bassist David Thompson, who in 2002 were playing a gig at the opening of a fly shop and got to thinking about the concept of a fishing-themed album. This new disc consists mostly of covers and originals performed by Winship, Thompson, and various musician friends. Listening to it is like hanging out with your pretty cool but sometimes embarrassing uncle who’s a stellar player, but one who suffers from chronic corniness.

Good lyrics are hard to write. (I know, because I struggle with them myself.) But good lyrics about fishing are exceptionally challenging. These guys are all seasoned musicians—renowned mando player Tim O’Brien and his singer-sister Mollie help out on the vocals, which are impressive overall. Alas, the CD kicks off with “Little Miss Cutthroat,” a Thompson original that begins like a Fishing Facts forum letter and gets cornier from there: And when she swallowed my line/I knew she wasn’t just another fish in the sea, or, Little miss Cutthroat/my Yellowstone dreamboat/more than just my fly is hooked on you. Sheesh! To be fair, they push the corniness so far that it’s kind of entertaining—I couldn’t help but laugh when, in the accompanying video, the angler starts making out with a person dressed in a ridiculous trout getup. Even so, I was relieved to move on to “Mayfly,” a winner that, according to the liner notes, was written while fishing, and “The Eel’s Nephew,” a fine swing ditty—sans lyrics!

Here’s my own Fishing Fact: It’s a tall order to write fishing-themed songs that aren’t (a) painfully corny, (b) painfully earnest, or (c) painfully John Mellencamp-ish. The tracks that worked best were only peripherally related to fishing, or had nothing to do with it, like the funky gospel tune “Wade in the Water,” the abovementioned swing-blues-pickin’ “Mayfly,” and standout instrumentals “Lost River” and “Fishin’ in the Wind,” which spotlight banjo and mando/guitar respectively.

So I’ll conclude this trip with song-by-song catch and release tips:

“Little Miss Cutthroat”—Release. (a)
“Mayfly” — Catch.
“Gone Fishin'” — Release. (a)
“The Eel’s Nephew”—Catch.
“Waiting on the Evening Rise”—Release. (b)
“Wade in the Water”—Catch.
“Fishin’ in the Wind”—Catch.
“Old Bamboo”— Release (b and c)
“I Caught a Keeper”—Release. (a)
“Lost River”—Catch.
“Church of the Wandering Stream”—Oooh…Almost a (b), but I’ll keep her: Catch.
“Fishing in the Dark”—Release. (a)
“Opening Day”—a.k.a. Opening Day on Windham Hill. Release.
“The Winding Stream”—Catch.
“The Ol’ Diamondback Sturgeon”—Oh, for god’s sake! A play-by-play from the fish’s perspective? RELEASE! RELEASE!
“Everybody’s Fishin'”—Catch. Hey, it’s corny, but at least it makes you want to dance.