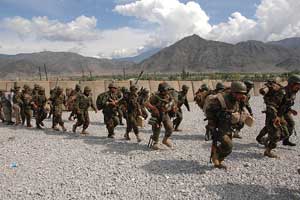 The United States has been prosecuting the war in Afghanistan for nearly eight years—and still doesn’t know what it’s doing.

That’s the basic message of the assessment submitted to the Pentagon and the White House by Gen. Stanley McChrystal, the top US and NATO commander in Afghanistan. The Washington Post got hold of and posted a copy of the 66-page report—which President Barack Obama has already reviewed—and the newspaper focused on McChrystal’s conclusion that he soon needs additional military and civilian forces in support of a revived strategy or “risks an outcome where defeating the insurgency is no longer possible.” McChrystal doesn’t sugercoat. He notes the “overall situation is deteriorating”—thanks to the resilience of a growing insurgency and a loss of confidence among Afghans in their own government and the international community—but he does state that some form of victory is possible, with those extra resources and a profound shift in strategy toward counterinsurgency operations that emphasize building connections between the Afghan populace and US, NATO, and Afghan security forces. “The key takeaway,” he writes, is an “urgent need for a significant change to our strategy and the way that we think and operate.”

McChrystal describes all that would be necessary for this new-and-improved strategy to work, such as beefing up Afghan security forces, dealing with the ineptitude and corruption of the Afghan government, and redefining “the nature of the fight.” To some much of this will seem like a bridge too far. But what jumps off these declassified pages is line after line indicating that the US and NATO forces in Afghanistan have truly botched the mission so far. In other words, thank you, George W. Bush and Dick Cheney.

McChrystal notes that US and NATO forces—known as ISAF, for International Security Assistance Forces—have really screwed the pooch to date:

ISAF is a conventional force that is poorly configured for [counterinsurgency], inexperienced in local languages and culture, and struggling with challenges inherent to coalition warfare. These intrinsic disadvantages are exacerbated by our current operational culture and how we operate.

Pre-occupied with protection of our own forces, we have operated in a manner that distances us—physically and psychologically—from the people we seek to protect. In addition, we run the risk of strategic defeat by pursuing tactical wins that cause civilian casualties or unnecessary collateral damage. The insurgents cannot defeat us militarily; but we can defeat ourselves.

So the United States has spent $440 billion on the war in Afghanistan only to field a force not up to the task and that has failed. And he lists areas where these failures have occurred: “how we traverse the country, how we use force, and how we partner with the Afghans.” The commander doesn’t hold back: “our conventional warfare culture is part of the problem.”

McChrystal fully unloads on this point:

ISAF has not sufficiently studied Afghanistan’s peoples whose needs, identities and grievances vary from province to province and from valley to valley. This complex environment is challenging to understand, particularly for foreigners. For this [counterinsurgency] strategy to succeed, ISAF leaders must redouble efforts to understand the social and political dynamics of areas all regions of the country and take action that meets the needs of the people, and insist that [Afghan] officials do the same.

That is some admission. US forces have been engaged in Afghanistan for longer than the length of US involvement in World War I and II, and they are still essentially clueless. And the insurgents, he adds, “out perform” Kabul and the ISAF at information operations.

The problem is big and deep, according to McChrystal. US and NATO forces, in adopting a counterinsurgency tactic of protecting and bonding with the Afghan public, will have to forge new connections with the Afghan people while standing up an Afghan security force and interacting with a corrupt Afghan government that alienates the public. And there’s no time for a gradual ramp-up on these fronts: “Success will require a discrete ‘jump’ to gain the initiative, demonstrate progress in the short term, and secure long-term support.”

In this assessment, McChrystal does not offer a solution to one of the most daunting problems he identifies. “Eventual success requires capable Afghan governance capabilities and security forces,” he states. He explains that the US and NATO forces have become identified with the feckless Afghan government:

The public perceives that ISAF is complicit in these matters, and that there is no appetite or capacity—either among the internationals or within [the Afghan government]—to correct the situation. The resulting public anger and alienation undermine ISAF’s ability to accomplish its mission. The [insurgents’] establishment of ombudsmen to investigate abuse of power in its own cadres and remove those found guilty capitalizes on this [Afghan government] weakness and attracts popular support for their shadow government.

Ponder that. The top commander in Afghanistan is acknowledging that the insurgents have more transparency and accountability in their shadow government than does the government he must rely upon for success.

While McChrystal’s study calls for doubling the size of Afghan’s military after it increases over the next year from its current level of 90,000 to 134,000 troops—though none of this might be feasible—he doesn’t propose how to clean up and bolster the Afghan government.  McChrystal says that the “ISAF can no longer ignore or tacitly accept” abuse of power or corruption. But what happens if there is no competent Afghan government to work with? Then does any of the rest of this matter?

Something else is missing from the paper: any historical reference. McChrystal cites no example of a similar campaign that has succeeded. Last week, Sen. Jim Webb (D-Virginia) made this point during a Senate hearing, saying, “We run the risk…of allowing our success to be defined by something that has never happened before and something we can’t totally control.” McChrystal appears to be working without a successful model.

McChrystal is a widely respected commander—even though he’s been implicated in the detainee abuse scandal and the cover-up of Pat Tilman’s death by friendly fire. And it’s certainly his job to figure out how to win in Afghanistan. But what if doing so is not possible? McChrystal’s paper does outline a theoretical path to success. Yet a clear-eyed reading of it suggests that the odds of victory are quite long, with so many essential factors beyond the control of the United States and NATO. In being so candid about all the problems, McChrystal has provided ammunition to those who worry that it’s the mission itself that might be the problem.