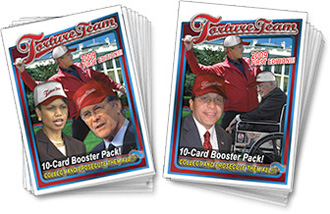 It was only a matter of time. Remember those Operation Enduring Freedom trading cards that Topps put out in 2001? And who could forget those Iraq’s Most Wanted trading cards released by the Pentagon back in the halcyon days of 2003. There’s a card for everything nowadays. During the Clinton years, I even wrote a little piece for Mother Jones on colorful infectious disease trading cards the CDC was handing out to children—ebola, plague, meningitis and all of that fun stuff. (Sorry, it’s not online.) So it comes as little surprise that the Center for Constitutional Rights has come up with its own Torture Team collectibles.

You can order up hard copies of the Torture Team cards—10 for free; all 20 for $5—but if you’re just browsing, CCR has created a neat Flash widget to display them online. Check out George W. and Condi, along with Cheney and his evil sidekick David “the Shadow” Addington, arguably the most ruthless driver of Bush-era torture policies and, according to a media quote on the card, “the most powerful man you’ve never heard of.” Don’t forget White House legal pariahs like John Yoo and Jay Bybee. Or the brass—former Pentagon top dogs like Don Rumsfeld, Guantanamo CO Geoffrey Miller (who helped involve doctors in torture) and the Iraq-bungling Douglas Feith. You can click to flip the cards and reveal each player’s basic stats, along with fun tidbits and quotes in their own words. (Feith: “Removal of clothing doesn’t mean naked.”)

Best of all, if you want to add your two cents, the site lets you sign up as part of “Team Justice” and create your own card, complete with your photo and whatever you care to say about the patriotic activities of the Torture Team. The mind reels with the possibilities. Somehow, though, I don’t think Topps is gonna greelight this one. It doesn’t package well enough with bubble gum.