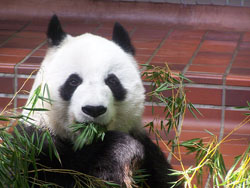 With their distinctive coloring and large size, Giant Pandas have long been a favorite of zoo-goers. The giant furballs look as if they’d like nothing better than to chew some bamboo and watch a re-run of Mad Men with you on the couch. Maybe order a pizza, vegetarian-style. But contrary to their adorable appearance, giant pandas are actually quite ornery according to many keepers’ accounts. One Beijing Zoo panda named Gu Gu has attacked three visitors, one of which entered his cage specifically to hug him. In his most recent attack, the 240-lb Gu Gu “clamped down on the intruder’s leg and refused to let go… Zookeepers had to use tools to pry open the animal’s jaws.”

Fortunately for China, which rents out panda bears to various zoos for approximately $1 million a year, Americans and people around the world still love the panda. With their big dark eyes and baby-like body shape, pandas are easily anthromorphized and seem to breed well in captivity. In fact, 25 were born near Sichuan since the May 12 earthquake there.

While doubtlessly pandas will continue to prosper in captivity, their fate in the wild looks bleak. About 1,600 wild giant pandas continue to be endangered due to their restrictive diet, poaching, and encroachment on habitat by human development. A recent report by WWF says that the wild giant panda is facing extinction in just a few decades: as China’s economy continues to ramp up, it is fueling development and fracturing panda habitat to the point where inbreeding, stress, and disease risk makes the wild population unviable.

If there is good news to report about the giant panda, it’s only that many conservation groups are working to preserve its habitat in China. And that at $1 million a pop, it’s unlikely that the Chinese government will let them go extinct. For an example of their global appeal, gratuitously cute video below: