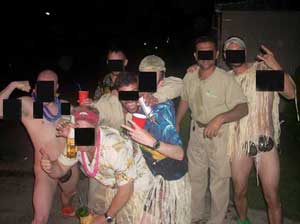 Provided by the Project on Government Oversight.

How is ArmorGroup North America responding to the allegations that its Kabul embassy guards were engaging in a range of unbecoming conduct? The firm (and its parent company, Wackenhut) has so far declined to issue any comment. Behind the scenes, however, swift action has been taken, though not against ArmorGroup employees who engaged in or approved of lewd behavior, humiliating hazing rituals, and other practices that put the embassy at risk. Rather, says the Project on Government Oversight, one of the whistleblowers who brought these explosive allegations to the watchdog group’s attention has been retaliated against by his employer, an ArmorGroup client:

One of the whistleblowers who helped expose the guard scandal at the U.S. Embassy in Kabul has just been forced to resign after his company—whose client is ArmorGroup, North America (AGNA)—came to believe that he had reached out to D.C. for assistance. The company told POGO that the whistleblower’s resignation was voluntary.

However, information obtained by the Project On Government Oversight (POGO) strongly suggests he was pressured into resigning to avoid being fired, an action often referred to as constructive dismissal.

POGO is deeply concerned about the action allegedly taken against the whistleblower. He is being forced out at a time when three of the supervisors responsible for allowing the misconduct at Camp Sullivan have been allowed to quietly resign and escape accountability. As per our letter to Secretary of State Hillary Clinton of September 1, 2009, POGO calls on the State Department to take immediate action to protect both the physical and employment security of whistleblowers who have stepped forward with allegations of serious misconduct involving ArmorGroup, North America and others.

According to POGO, at least one of the ArmorGroup supervisors who resigned did so following the group’s letter to Secretary of State Hillary Clinton on Tuesday, outlining what POGO described as a “Lord of the Flies environment” that included “near-weekly deviant hazing and humiliation.” The allegations, which have drawn widespread media attention, have already prompted action by the embassy in Kabul. The embassy has banned alcohol at Camp Sullivan, where ArmorGroup’s employees live, and placed the contractor’s employees under the supervision of members of the State Department’s diplomatic security branch. On Thursday, Ambassador Karl Eickenberry held a town hall-style meeting with embassy employees to address concerns raised by the allegations.

At a briefing on Wednesday, State Department spokesman Ian Kelly told reporters that three separate investigations were underway into the conduct of ArmorGroup personnel. The department’s Inspector General has launched a probe, and Eickenberry has instructed his senior staff to review the security situation. In addition, the State Department is dispatching a team of senior diplomatic security and contracting officials to Kabul to investigate in the next few days. “To be clear, there were some things going on in Kabul which we were not aware of, but frankly, we should have been aware of,” Kelly said. Even so, he insisted that the embassy “has been well protected.” A top State Department contracting official, William Moser, made a similar claim before Congress in June, telling Sen. Claire McCaskill’s subcommittee on contracting oversight that despite some “deficiencies,” ArmorGroup’s performance “has been and is sound.”

His statement, and Kelly’s comments yesterday, are at odds with nine separate warnings the State Department issued to ArmorGroup starting just weeks after the contractor took over the embassy job in July 2007. The notices, some threatening termination of the contract, warned of a variety of lapses, including a failure to provide enough guards and equipment. In one case, a State Department contracting official wrote that ArmorGroup’s “contract deficiencies…endanger performance of the contract to such a degree that the security of the US Embassy in Kabul is in jeopardy.” As recently as March, after ArmorGroup told the State Department that its staffing was “fully contract compliant,” the department informed the contractor that it still had “grave concerns” about its guard levels. “In inspections of the guard force operations, the State Department observed that at least 18 guards were absent from their posts at the embassy,” according to an investigation by McCaskill’s Senate subcommitee.

ArmorGroup North America’s parent company, Wackenhut, has not yet addressed POGO’s allegations publicly. But, as of Thursday morning, the company was preparing to release a statement. “We’re obliged to go through certain approval channels and once we go through those channels we will be able to release our statement,” a Wackenhut official told me. She said she “was not entirely at liberty to say” what those channels were, however. “We are working very closely with the State Department on this issue,” she added. “And we will be able to address the various details regarding that once we release that information.”