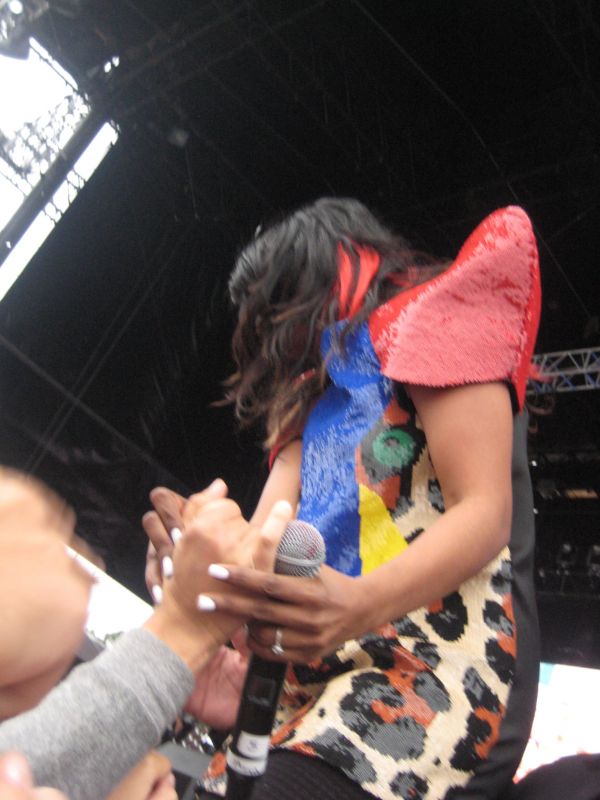 Full Disclosure: I love M.I.A. I have loved M.I.A. since “Sun Showers” was a single, and I will keep loving her long after anyone else does. Even so, I tried not to get my hopes up for her Sunday show at Outside Lands. The complex rythms, beats, and remixes on Kala can’t be reproduced on stage. That leaves just Maya Arulpragasm, which is fine for a club or the back of a record store, but not well suited to a stadium. After a lackluster Coachella performance this spring and that just-plain-weird Grammy appearance, there wasn’t much to expect.

Fortunately, her hour-long set took me completely by surprise. The rapper has amped up her stage show, with a troupe of back-up dancers (including two almost identical looking redheads in Michael Jackson t-shirts and women gyrating in neon zebra-print leggings), an IMAX worthy video screen replaying a colorized version of the performance in near-real time, and a wardrobe straight out of a 1980s preschool nightmare. Before launching into the single “Boyz”, M.I.A. and her back-up militia dumped hundreds of neon plastic horns into the crowd.

(Translation: “A lot has changed since I last came here. I got engaged here. And then I got pregnant here. And now I’m really, really scared of this fucking town!”)

In short, after several near-misses at big shows in the past, Arulpragasm finally seems ready for her close-up. Which is good, since, although Tenacious D technically performed later (filling in for the Beastie Boys), M.I.A. really had the last word on the main stage this past weekend.

Not everything was roses. The crowd screamed when M.I.A. announced a new song, but its response to the actual tune (called, if memory serves, “No Bullshit”) was less than enthusiastic. She stuck mostly to one side of the stage and relied heavily on her pan-ethnic team of dancers to keep the crowd amped. The group behind me also insisted that the singer was high. Actually, they were high. It’s fair to say that M.I.A. has hit her stadium stride, and she sent the three-day-long Outside Lands festival out with a bang.