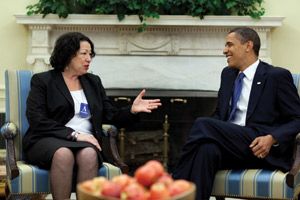 By a vote of 68-31—supported by all Democrats present—the US Senate confirmed Sonia Sotomayor for the Supreme Court, making her the first Hispanic justice. Though her confirmation was all but assured, Sotomayor had emerged as a divisive figure among conservatives, who claim that her judicial philosophy is tainted by ethnic favoritism. They cited an appeals court decision Sotomayor made upholding an affirmative action law that was seen to harm a group of white firefighters in Connecticut, in addition to a comment she made about the merits of a “wise Latina” judge.

But Sotomayor’s conservative critics never gained traction, perhaps due to the political stigma associated with attacking Hispanics, a demographic the GOP hopes to win over in future election cycles. Still, only nine Republicans voted for Sotomayor. Speaking directly after the vote, Senator Patrick Leahy (D-VT) joked that Republicans would have been dissatisfied with anyone Obama nominated, no matter how qualified. “If the President had nominated Moses… they would have voted no,” he said, trying to stifle laughter.

The statements of support are already coming out.

First, the nominator himself:

[T]he janitors, nurses, security guards, bus drivers and other hardworking members of SEIU have proudly stood with her because her personal story of achievement has given her a rare insight into the lives of people who get up and go to work each day to make a better life for their families.”

[B]y confirming [Sotomayor] today, the U.S. Senate refused to be intimidated by the National Rifle Association and instead did what’s right for the country and the rule of law.