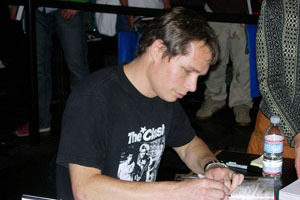 Here’s another entry in the bulging Shepard Fairey as Walking Pop-Culture Contradiction file: The designer of the IOHP*, who got his start tagging and stickering public places, has declared war on graffiti on his home turf. The Eastsider reports:

A few days ago workers sandblasted the brick exterior of his Echo Park studio, gallery and ad agency – called Studio Number One – and applied a shiny layer of anti-graffiti coating to the walls. Frequent tagging and graffiti had apparently taken a toll on the Sunset Boulevard building and Fairey, who rose to fame by employing the same hit-and-run tactics of graffiti artists and taggers.

“When graff seeped into the raw brick it was very difficult to clean,” said Fairey, creator of the Obama “Hope” poster, in an email forwarded by one of his employees. “The building is historic and I love and want to protect the brick. The city was never any help with removal. Graffiti is par for the course.”

Fair enough—there’s a difference between bombing an abandoned building and a cool old building. But perhaps Fairey could have worked out an arrangement that made his studio a site for street art while also protecting it? Teflon-coating the wall probably won’t stop the “graff.” As one Eastsider commenter notes, “This place just got a huge bullseye on it.”