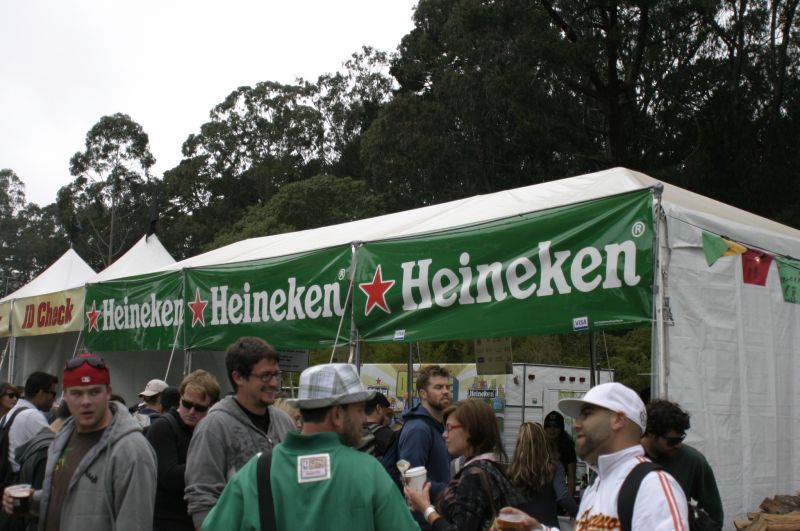 And the brands played on. Photo: Andy Kroll.

The girl nervously watched as the tattoo formed on her hand, a small, colorful flower in the fleshy crook between her thumb and forefinger. Up close, though, the flower’s shape came into focus: It was actually a stem and bulb formed by the silhouettes of tiny cars. Mid-size sedans, actually. That’s because this particular tent, peddling not just tattoos but bandanas and gift bags, was Toyota’s “Prius Spot” tent, one of several scattered around this past weekend’s Outside Lands festival in San Francisco. A tricked-out version of the popular hybrid sat parked inside.

I asked the flower girl’s boyfriend why anyone would want a flower made of sedans or an automaker’s name inked on their hand. He shrugged. “It’s only temporary, right?”

Others stepped up for tattoos of their own, choosing between the Camry-inspired flower or a tangle of barbs encircling Toyota’s logo with the name “TOYOTA” emblazoned underneath. Indeed, a winged skull with the Toyota logo was among the most popular tattoos of the day, one of the inkers told me.

Needless to say, the ploy took branding to a whole new level.

Like that girl’s hand, just about every other inch of this weekend’s Outside Lands festival was “Presented by” or “Courtesy of” or sponsored in some capacity by a corporation or company. It was brand overload all weekend (at least for me), the staggering number of companies’ names plastered throughout the festival’s grounds staggering.

Take beer-maker Heineken. There was “The Experience,” a Heineken-sponsored, Epcot-shaped 21-and-over indoor dance club with a DIY turntable station, real DJ stage, and, of course, a bar stocked with Heineken. Atop the club’s dome shined a Heineken sign that, on each of the festival’s three nights, glowed like Gatsby’s beacon. Heineken was the beer of choice at all the other concessions stands (and, I might add, in the media tent at no charge and no limit), and Heineken’s green signs hung over nearly every place that sold booze. The plastic cups bore Heineken’s name. The 21-and-older wristbands did, too.

Visa was likewise omnipresent. At the few beverage spots that took credit cards, a sign hung overhead informing festivalgoers that “Outside Lands Prefers Visa.” Better yet, near the Twin Peaks stage at the festival’s main entrance stood the “Visa Signature” lounge. The catch: Only Visa Signature cardholders were allowed in. (Though not a cardholder, I wheedled my way with my press pass and fancy-looking camera.) Inside, cardholders sprawled on white leather couches sipped drinks from the private bar and watched Robert Randolph and the Family Band on piercingly hi-def TVs performing the main stage at the Polo Field. Complimentary sunscreen sat nearby, as did ample informational material for more Visa offerings. As I made my way out, a few guys whined to the lounge’s bouncer for being refused entry.

The sense of corporate takeover wasn’t solely from the big names; it was the ubiquity of brands and business that was unnerving. Whole Foods drew crowds at its $1 dollar snack tent—not surprising when a pizza a few feet away cost ten times that. Major League Baseball set up a batting cage and speed-pitch contest on the hill ringing the Polo Field. (How these related to music and art I’m still not sure.) Kids and adults alike fled the Polo Field’s wind and dust for Xbox 360’s Beatles Rock Band tent, replete with stages, shag carpet, and even TV screens on the floor built to resemble stage monitors. I could just make out “Come Together” while sitting in the nearby Garnier Fructis “salon”, which included stylists cutting hair, a mirror with which to use any number of gels and sprays, and—because this was a music festival, after all—a karaoke station. A pair of tone-deaf tweens limped through Hanson’s “MMMBop.”

Which was almost as painful as Intel’s faux-snarky Today is so Yesterday dome, where men clad in one-piece white jumpsuits doled out mysterious blue juice and donned blue sunglasses reminiscent of Bono’s. The women, clad in white go-go boots and white skirts and blue bob-cut wigs—blue being Intel’s color brand—danced to thumping techno offerings. In addition, several staffers directed visitors to the latest features on some new Intel gizmo I couldn’t quite see due to the swelling crowd surrounding whatever it was. A nearby sign told me it was the technology of “Tomorrow.” Because today is so yesterday.

Not that these distractions kept the masses away from the ostensible purpose of Outside Lands: the music. Modest Mouse’s midday show drew a substantial crowd as Isaac Brock and the rest of the band put in a fantastic and entertaining effort. “Fire It Up” and “Dashboard” were especially memorable, and the crowd’s ample applause well-earned. And from what I caught of her show, the raucous thousands gathered for MIA were in store for something special.

Nevertheless, as I made my way out later in the evening, I saw decent-sized crowds headed for the Beatles Rock Band tent and Intel dome. Some chose to watch the MIA show on Intel’s massive screen behind the bar. Yet others still huddled around “Tomorrow,” while the music played on outside. I passed the Toyota booth again, where a couple of teen hipsters had snagged Toyota bandanas and tied them around their faces under the eyes. They reminded me of some of the protesters after the Iran election riots, or Latin American revolutionaries. Yet there, front and center, was the Toyota logo. The irony seemed lost on them.