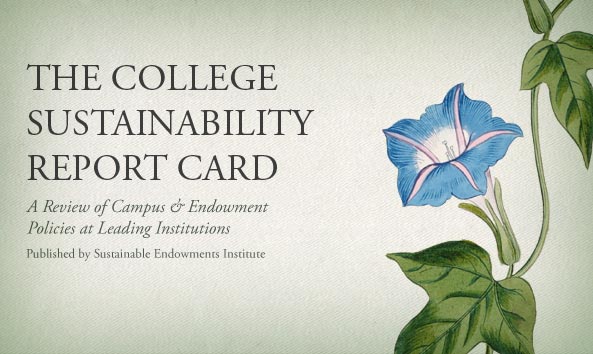 If you’re as skeptical of US News & World Report’s college lists as I am, you might want to take a look at a different way of ranking colleges: The College Sustainability Report Card. The 2009 edition was recently released, and the evaluators report some encouraging news: Two out of three schools improved their overall grade between 2008 and 2009. More than four in five schools improved from 2007 to 2009. CSRC evaluates schools on a host of criteria, including energy use, dining hall food sourcing, recycling, green building, endowment transparency, and investment priorities.

Like any college ranking system, the CSRC has its flaws. One that bugs me: Since only colleges with endowments of $160 million or more were considered, some smaller schools with excellent environmental programs (such as those in the Eco League) were left out. It’s a shame, since these schools are small and nimble, they often have the flexibility to implement new ideas more quickly than big colleges. (Some progress: When I blogged about this problem in 2007, the Report Card evaluated only the 200 best endowed schools in the US; now it considers the top 300.)

List of “overall sustainability leaders” (colleges that were graded A-, the highest grade the evaluators gave out) after the jump.

UPDATE: Treehugger’s green college slideshow features some of the little guys that CSRC passes over.