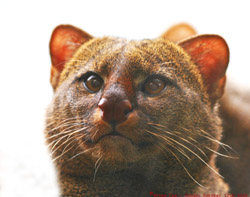 This week’s endangered animal is the somewhat strange-looking jaguarundi. The jaguarundi is a bit of an in-betweener: it’s not as big as a jaguar or mountain lion, but it’s larger than most housecats. Jaguarundi also look different than most cats, on account of their small rounded ears, closely set eyes, and uniform color. The “otter-like” cats are most closely related to cougars and cheetahs, though scientists are still unsure of exactly how the it evolved since cheetahs are native to Africa.

Jaguarundi reportedly move in a “weasel-like” manner and unlike many cats, seem to enjoy getting into water. They are reportedly strong swimmers and go to the water at midday to drink, but also in the evening when they are hunting or fishing. They weigh only about 13 to 15 pounds, but because of their lifestyle, are larger and more muscular than a housecat of a similar weight.

The jaguarundi live mostly in the thorny brush of Texas’s Rio Grande Valley, as well as in Mexico. Although the jaguarundi has been on the endangered species list since 1976, there has never been a conservation plan for them. The lack of any conservation plan, in addition to habitat destruction by human development, is likely why seeing a jaguarundi is now a rare and exciting event, even in Texas.

However, there is some good news: in February of this year, the Department of Fish and Wildlife announced that the jaguarundi would be one of 23 endangered species from the Southwest to recieve a five-year review. The conservation group WildEarth also recently filed a suit against Interior secretary Ken Salazar to develop a recovery plan for the animal. In addition, the jaguarundi continues to survive in Mexico, and populations have been spotted as far south as South America.