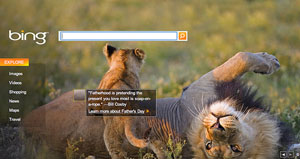 Our intrepid political blogger Kevin Drum posted last Thursday on whether anyone is actually using Bing, Microsoft’s newly revamped, rebranded search engine. So I just had to share some fun stuff I read in Business Week last month about how Bing—already targeted by bloggywags as an acronym for “But It’s Not Google!”—got its name. (I can’t say I use Bing, but I have tried it: The home page is prettier than its rival’s, but after searching it for “Michael Jackson,” and looking at the list of results, I got to thinking that the Gates Posse should have called it Biig: “But It Imitates Google!”)

Big companies just can’t come up with clever names the way we at Mother Jones brainstorm clever headlines—that is, in a brief, frenzied series of internal emails. These days they feel compelled to outsource. According to the June 15 story by Bizweek marketing editor Burt Helm (the issue caught my attention because my birthday is June 16) Microsoft hired a firm called Interbrand, which set eight of its employees to brainstorming around themes like “speed” and “relevance.” In six weeks, the team came up with 2,000 names, then nixed the lamest—somehow overlooking Bing—and whittled the list to 600.

Know the old expression “Too many cooks…”? Well, enter 20 linguists—twenty!—and two trademark lawyers to scour the surviving ideas, checking, for instance, that a word like Bing doesn’t translate into Serbo-Croation as the ancient insult, “Your mother snorts kitty litter.” Mattel, as Helm notes, dubbed its latest American Girl doll Rebecca Rubin, only to belatedly learn that a woman named Rebecca J. Rubin was wanted by the FBI for arson and for conspiring to torch government buildings. Mattel kept the name, despite headlines like “American Girl and Eco-terrorist” (ABC), which actually gives this overmarketed product a little je ne sais quois. And if you really want to nitpick, the doll has no middle initial.

Anyway, in the end, Interbrand had between 50 and 60 names to show their Redmond client. Microsoft chose eight for submission to focus groups, who apparently preferred “Bing” to alternatives such as “Kumo” and “Hook.” For my part, “Bing” just makes me think of Monty Python’s “machine that goes bing!” Which is hilarious, but somehow, as old and British as it is, the comedy sketch manages to aptly lampoon our own screwed up health care system. Which depresses me so much that I turn to Google for solace.

What the heck has any of this to do with Ford? Well, as with Bing and Jacko (and Kevin Drum), it’s all about branding.

Ford Motor Company, as we reported last November (“How Ford Lost Focus“), ignored the environmental rantings of its chairman and company scion Bill Ford Jr. until it was too late, instead pumping out high-profit, gas-guzzling pickups. Profitable, that is, until gas prices spiked last year and everyone stopped buying the trucks. The company’s survival rested on a plan to start marketing its European small-car models to American customers.

The challenge was to come up with a design that could suit the tastes of consumers around the globe, thus cutting the cost of selling different small cars in every market. So, it made a Fiesta hatchback that, as noted in—hey!—the very same issue of Bizweek, has with a rear end that looks like that of a small SUV, a dashboard inspired by a cell-phone keyboard, and oversized headlights that belong on a bigger vehicle. But the part I liked best was the magazine’s description of Ford’s target Fiesta buyer:

Her name is Isabella, a name that consistently ranks among the Top 5 baby names for American girls. Isabella isn’t American, though. She is stylishly Italian, a recent college grad living near Milan. She’s a modest earner, hip, urban, creative, and way into social media. She’s also considering journalism as a career.

In other words, she’s nuts. And entirely fictitious.