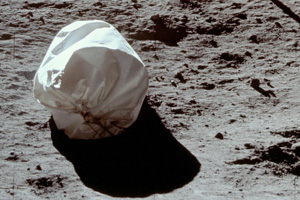 Monday marks the 40th anniversary of the first walk on the moon. But before getting all nostalgic about Neil Armstrong and his small step, let’s examine one dark side of the moon landing: lunar litter. As I was geeking out and reading the official Apollo radio transcripts, I was intrigued to find that six minutes before stepping onto the moon for the first time, Armstrong took a “jettison bag” and dropped it onto the surface. The bag, NASA explains, contained “empty food bags and other things [the astronuauts] no longer need and don’t want to have to use fuel to take back to orbit”—including bodily waste collected inside their space suits. In other words, garbage. The big white trash bag was even documented by the very first photo Armstrong took on his moonwalk: 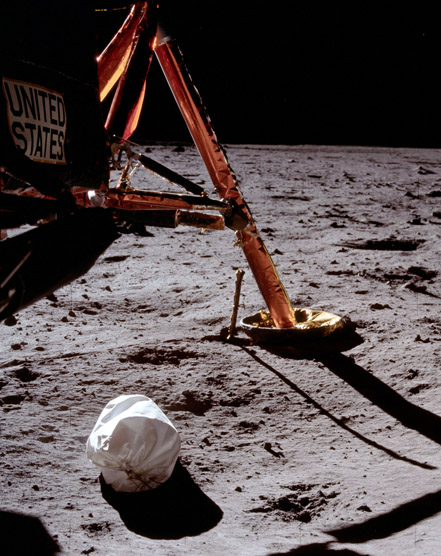 Funny how that shot never makes it into the Apollo 11 retrospectives. It’s unclear what happened to the historic trash bag—was it incinerated when the astronauts took off again, or has it remained sitting beneath the left-behind section of the lander, frozen in time? Perhaps we’ll get the answer from the NASA orbiter that’s currently taking detailed photos of Tranquility Base, trying to check on the condition of artifacts such as the American flag planted there. I wonder if the resolution will be good enough to spot the first sack of lunar litter, still awaiting pick-up, 40 years later.