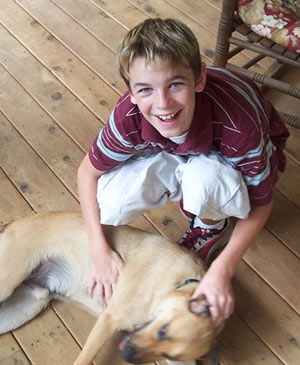 Photo of Joe Teater provided by the Teater family; Front page photo used under a Creative Commons license by flickr user <a href="http://www.flickr.com/photos/goldberg/">goldberg</a>

Last October, we reported what the New York Times has now discovered—something we’ve all probably suspected, but had little hard data to go on: that driving a car while yakking or texting on an electronic device is an extremely risky proposition. And that the hands-free laws many states have enacted are of little value, a politically expedient solution that is unlikely to save lives, but lets lawmakers seem to be doing something without incurring the wrath of the powerful cell phone industry.

The moving story by Mother Jones contributor Myron Levin involved the plight of the Teaters, a Michigan family whose 12-year-old (pictured) was killed by a chatting motorist, and his father’s determination to get some answers. The driver, Levin reported, “had clear skies and good visibility. She was sober. And yet she had failed to process a whole string of visual cues. To Dave Teater, this made no sense at all—so he began to do some research.” Key to Levin’s story was the quashing, by top Transportation Department officials, of an extensive report on cell-phone driving risks that the National Highway Transportation Safety Administration (NHTSA) had intended to make public.

That report might have saved lives had it been released as intended back in 2003. It included the first official government estimate of the number of people killed on the road by cell phone use each year—nearly 1,000. As noted in the story, that’s a conservative estimate. (Harvard researchers put the number closer to 2,600.) But any government acknowledgement of the problem would have done much to raise awareness. DOT brass also put the kibosh on a letter that NHTSA officials had composed to the governors of every state, warning that hands-free legislation was unlikely to make their citizens safer. Without this knowledge, states forged ahead with their bills.

Not long after the original story, we reported on a lawsuit by Public Citizen and the Center for Auto Safety to force the government to reveal its trove of documents related to driving distractions. That suit has finally yielded results. “By keeping this information secret from the public for the past six years, the government has endangered even more lives,” the victorious plaintiffs noted in a press release today touting the release of hundreds of pages of documents, which “reflect facts about safety risks that the public had every right to see.”

Also from the release:

These documents show that it is the conversation itself, not the device used to hear it, that causes “inattention blindness,” a cognitive state that slows a driver’s reaction time and limits his ability to detect changes in road conditions. Further, well-documented scientific research and driving simulations analyzed in the NHTSA documents found that drivers using hands-free technology talk on the phone with greater frequency and for longer intervals.

“People died in crashes because the government withheld this information,” Clarence Ditlow, executive director of the Center for Auto Safety, noted in the release. “The studies NHTSA concealed showed that all cell phone use is as hazardous as drinking and driving.”

“A travesty,” was how Public Citizen attorney Margaret Kwoka described the agency’s failure to release the documents in response to an earlier freedom of information act request, forcing the groups to sue. The Center is now petitioning NHTSA to support state programs to limit any cell phone use while driving, and to take steps to ensure that in-vehicle communications systems won’t let drivers chat while the vehicle is moving.