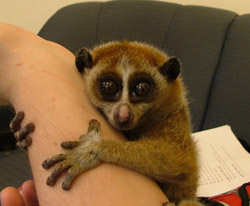 This week’s cute endangered animal is the aptly-named Slow Loris. The Slow Loris is a sympathetic little guy. He’s got anime-huge eyes, and moves so slowly that he’s an easy target for poachers in his native Southeast Asia. The nocturnal Slow Loris’s only natural defenses are 1) holding onto a branch really tight; 2) a semi-toxic bite; 3) emitting an unpleasant smell; and 4) curling up into a protective ball-like shape. Pretty sad. One cool thing about the bite is that the Loris will nibble on his inner elbow to get toxins, then mixes the toxins in his mouth so that when he bites, it will sting more. Unfortunately, the toxin isn’t fatal or debilitating for humans, though it will cause some pain, swelling, and redness.

The Slow Loris is a case of an animal being too cute for its own good. Besides having a babyish set of huge eyes, the Loris is furry, small, quiet, and apparently enjoys being tickled. The animal is prized as a pet, and shipments (often to Japan) of hundreds of Lorises have been intercepted. The fact that the Loris’s instinct, upon stress, is to curl up into a ball makes it easy to transport, though often poachers will remove the Loris’s teeth as a precaution. When not sold as pets, Lorises are hunted for use in traditional Asian medicines and like many other arboreal species, are threatened with habitat loss due to agriculture and logging.