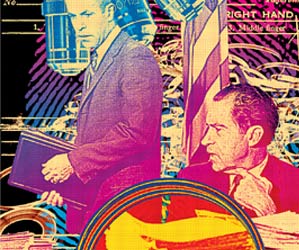 ON JUNE 20, 1972, President Richard Nixon and his chief of staff, H.R. “Bob” Haldeman, met in Nixon’s hideaway office at the Old Executive Office Building. Three days earlier, White House-connected dirty tricksters had been nabbed breaking into the Democratic National Committee‘s Watergate offices, and the 79-minute-long conversation—with Nixon’s secret taping system running and Haldeman taking his typically meticulous notes on a tablet of yellow lined paper with a ballpoint pen—at one point turned toward the break-in and how to craft a counterattack. What exactly the two men said to one another would become one of the great political mysteries of the 20th century: Sometime during the Watergate scandal, 18 ½ minutes were suspiciously erased from the tape recording of this meeting.

Many have since tried to figure out what transpired during that gap. But now, Phil Mellinger, a one-time systems analyst at the National Security Agency (NSA) who went on to a career in high-tech corporate security, thinks he has discovered a way to determine what was wiped off the tape. And the National Archives believes he’s on to something. In response to a request from Mellinger, the Archives unit in charge of the Watergate files has proposed conducting a scientific test that could yield information on what was said during the missing minutes. This procedure would not, as has been tried unsuccessfully in the past, seek to recover the obliterated audio. Mellinger’s approach takes a simpler route: resurrecting Haldeman’s notes via a CSI-ish technology that can extract information from the imprints made by a ballpoint pen.

For most of his adult life, Mellinger, 51, was no Watergate buff—though as a high school student, he did watch the hearings on TV and wonder, along with many others, what Nixon really knew. After graduating from Penn State, he joined the Air Force, serving at the NSA and Air Force Office of Special Investigations. (“I’ve been trained in bugging and debugging operations,” he says.) He then hit the private sector, eventually becoming chief information security officer for the ecommerce firm First Data Corporation, where he co-invented a credit card transaction tracking system before retiring in 2007.

In February 2004, Mellinger watched a TV program about the years-long effort of a journalism class at University of Illinois to identify Deep Throat. Professor William Gaines and his students had concluded that Fred Fielding, a White House lawyer during Watergate, had been Bob Woodward‘s legendary tipster. Mellinger was intrigued. It occurred to him that with his background in information analysis—lining up data points and finding connections—he could put together a chronology and “get a behavioral correlation between what Fielding was doing and what Deep Throat was telling Woodward.”

For weeks, he pored over the official reports, depositions, news stories, books. He found no conclusive link between Fielding and Deep Throat, who in 2005 was revealed to be Mark Felt, a former top FBI official. But Mellinger had caught the Watergate bug and had started developing an assortment of revisionist theories about various aspects of the multilayered scandal. He speculated that John Dean, Nixon’s White House counsel, had been the source behind Deep Throat—that he had used Felt to feed information to Woodward to undermine others in the White House. (“That’s absolute nonsense,” Dean says.) Mellinger became fascinated with the fact that Dean had destroyed the notebooks of Howard Hunt—the ex-CIA officer working in the White House who helped pull together the Watergate operation—and he suspected that part of the missing June 20 conversation was related to these documents. He wondered if Fielding had somehow been involved in the tape erasure. (Fielding declined a request for comment.) As for the big picture, Mellinger theorized that what had propelled the Watergate burglary was Nixon’s fear that the Democrats possessed evidence that he had covertly sabotaged Vietnam peace negotiations to boost his election chances in 1968. (Tapes of President Lyndon Johnson’s telephone conversations released last year show that Johnson suspected as much.)

As Mellinger shared his ideas with other Watergate researchers—a contentious and finicky lot—he was repeatedly asked what proof he had. He started thinking about physical evidence that might back up his theories. That led him to Haldeman’s notes from the June 20 meeting. Last October, he visited the National Archives repository in College Park, Maryland, near Washington. A white-gloved employee brought out a pair of handwritten pages. “Immediately I could see what had happened,” Mellinger says. The first page tracked with the first four minutes of the meeting, when Nixon and Haldeman didn’t discuss Watergate. The top of the second page referred to a “PR program,” and the notes seemed to correspond to a conversation about how the White House could attack political opponents looking to exploit the Watergate break-in. This, it seemed to Mellinger, must be the tail end of a longer discussion of Watergate. (A memo from the files of Rose Mary Woods, the Nixon secretary who claimed she had accidentally erased about five minutes of the tape while transcribing it, estimated that the PR portion of the conversation lasted only one or two minutes.) The rest of the second page related to non-Watergate matters.

“I went, ‘Holy cow!'” Mellinger recalls. There were only two possibilities: Either Haldeman had sat through a long stretch of discussion with Nixon and had written nothing down until the last minute or so, or he had taken notes for the rest of the time, and they had somehow gone missing. (Stanley Kutler, a prominent Watergate historian, says that a conversation of this length would normally have caused Haldeman to produce several pages of notes.) Mellinger took a close look at the two pages. There were four sets of staple marks at one corner—as if the pages had been taken apart and put back together several times.

A gap in the notes matching the gap in the tape? Had no researcher, historian, or archivist noticed this before? (Apparently not.) And if there were missing pages, was there a way to find out what had once been on them? Mellinger had an idea: electrostatic detection analysis. That’s a proven forensic technique used to capture indentations and impressions on a piece of paper—such as the marks made on a page in a pad by a pen writing on the pages above it. As the book Forensics Demystified describes the procedure, a sheet of paper is subjected to an electrostatic field: “Charged electrons from this static field are attracted to the damaged or impressed fibers in the paper where the indentations have been made.” Then toner can be placed on the paper—or on a thin cellophane sheet—and it will adhere to areas that have indentations: “The writing becomes pronounced.” Voilà, notes can return from the shredder. The original is not harmed.

Days after his eureka moment, Mellinger emailed David Paynter, the archivist in charge of the Watergate records, requesting that the Archives submit the two pages of Haldeman notes to this procedure. Attached was a nine-page analysis laying out his case. “I believe we now may have an approach to resolving the infamous 18 ½ minute gap,” Mellinger wrote.

The Archives doesn’t mess with its holdings lightly. But it has for years contemplated if anything could be done to bring back those 18 ½ minutes. In 2001, it established a panel to determine if new technology could salvage what had been on the erased tape. Audio experts were provided tapes with erasures similar to the Nixon gap, while the original remained safe in a vault. None of them could demonstrate that the destroyed conversation could be reclaimed. “We will continue to preserve the tape in the hopes that later generations can try again to recover this vital piece of history,” then-United States archivist John Carlin said in 2003.

Now the Archives, thanks to Mellinger, is once again hopeful. After he filed his request, a document forensics expert at the Archives examined the Haldeman notes, found indented writing on the second page, and concluded that electrostatic detection analysis could work on this document, according to Paynter. So Paynter recommended to higher-ups at the Archives that the Haldeman notes be tested. At press time, Paynter was awaiting the green light from his superiors. “The reason we’re going forward with this,” Paynter says, “is that we’ve already tried with the tape itself. Here’s another avenue to shed light on an important episode in history. It’s very exciting.”

There are plenty of caveats in this case. It’s possible Haldeman didn’t take any more notes corresponding to the gap. The impressions on the second page, Paynter points out, could have come from the writing on the first page. There’s also no telling if any recovered notes would alter the basic tale of Watergate—or further incriminate Nixon. But should the Archives come up with an account of the missing minutes, Mellinger, no matter how unconventional his theories may be, will earn what no other Watergate hobbyist has: credit for helping solve one of the last riddles of the scandal that defined an era.