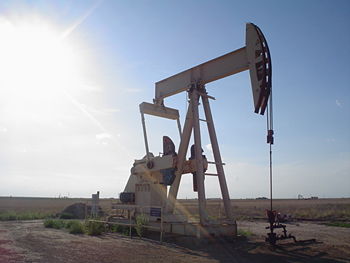 While most scientists agree that oil is abiogenic, or formed from biomass, creationist John D. Matthews (credentials unknown) has a different theory: Oil comes from God. In Answers Research Journal, which is published by the creationist ministry Answers in Genesis (the same folks who reported on the creationist Girl Scout) Matthews argues that God made petroleum in right after he made the Earth, and that the oil moved during the great flood.

As evidence for his theory, Matthews offers Noah’s Ark:

Some kind of oil derivative was used by Noah to waterproof the Ark. We also have to recognize that, in the pre-Flood landscape (although we do not have detailed descriptions in the book of Genesis), we do know that a wide range of minerals were available for human use. We read of gold, onyx, soil, building materials for cities, bronze and iron. The wide range of vegetation and the number of animal kinds also point to God who was liberal with his creative activity. So that although oil is not something simple (see earlier), the idea of God directly creating oil is not unreasonable when compared with other aspects of the young-earth creationist model.