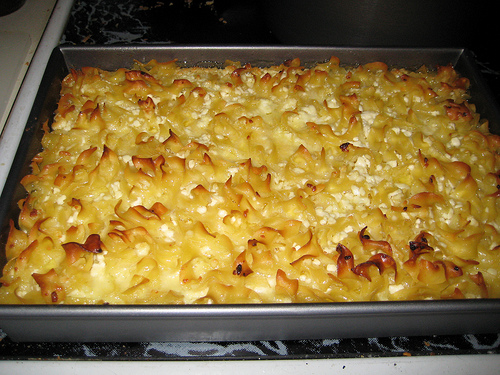 It’s been a busy week for Israel. First, Obama laid down the law in Cairo, demanding a two-state solution to the protracted Palestinian-Israeli conflict. In response, Israel’s far-right prime minister Binyamin Netanyahu announced that he *might* be open to the *possibility* of a Palestinian state. Iran *almost* elected a president who doesn’t deny the Holocaust, while sporadic protests around the United States sought (ineffectively) to coerce popular supermarket chain Trader Joe’s into ditching Israeli products.

But none of that could prepare us for Koogle, the rabbi-approved, egg-noodle-punning Hebrew language search engine for the country’s exploding Orthodox population.

Yes, Koogle—a play on Google and Kugel, a jewish noodle (or potato, or really anything) casserole—is better than all of these. The search engine (currently available only in Hebrew), filters all traif content, from sexually explicit or immodest images, to television, which is forbidden in most ultra-Orthodox communities. It also disables online shopping during the Jewish sabbath (Friday sundown to Saturday sundown). Creater Amos Azizoff told The Guardian he hopes the software will help more Hasidim—Judaism’s fastest growing sect—make the leap from the 18th to the 21st century.

Koogle may be the most ambitious web application targeting the Orthodox, but it’s not the only one. Top 3 Orthodox-only websites after the jump:

3) Voz is Neis: Think Good magazine for Orthodox Jews. The online newspaper, “What is News?” in Yiddish, tries to answer that question with folksy stories on things like the record number of births in Borough Park and why gossip is actually good for your health.

2) My Mikvah Calendar: You have a busy life, so why not use the magic of the Internet to help you maintain the ancient practice of “family purity”? The rabbi-approved application tracks a woman’s cycle, and actually texts her just before the prescribed period of separation between husband and wife around menstruation.