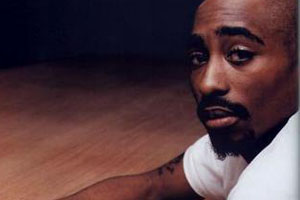 Well, Death Row Records has done it again. After declaring bankruptcy earlier this year the label is back in action, and another Tupac album is anticipated for 2010. How does this still work? That 13 years after his death people are still clamoring for his albums? For starters, Tupac, for better and worse, shaped today’s hip-hop. And because Tupac—while he had lots of issues—was honest and prescient in his lyrics, so much so that his songs continue to tell the story of the day 13 years after his death. In fact, my one-year-old niece is a Tupac fan. She listens to Tupac (“Ooo ooo child, things are gonna get easier…”) right alongside Free to Be You and Me, and I’m glad that when she understands the line in Changes, “We ain’t ready to see a black President,” she’ll wonder what he meant. But unfortunately the rest of his classic ballad still holds true today, right down to the war on poverty and the war in the Middle East.

Maybe if Tupac were still alive he’d have gotten sucked into The Surreal Life or I’m a Celebrity… or some other awful reality show, which would mean he likely wouldn’t be the Tupac people still admire, the rapper who made his life (and through creative Dr. Dre marketing, his death) about injustice and candor.

Got any favorite Tupac lines? “They got money for wars, but can’t feed the poor”; “Do what you gotta do, but know you got to change/ Try to find a way to make it out of the game”; “Time to heal our women, be real to our women / And if we don’t we’ll have a race of babies / That will hate the ladies, that make the babies/ And since a man can’t make one / He has no right to tell a woman when and where to create one.”