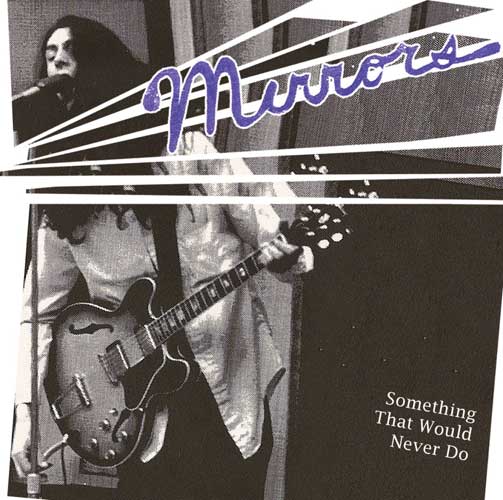 The cliché goes something like, “Not many people saw the Velvet Underground, but everyone who did, started a band.” Count the Mirrors among that select few who fit the cliché.

Formed in 1972 Cleveland, the Mirrors were one of the Ohio bands that—like Electric Eels, Styrenes, and Rocket From the Tombs—creating the embryonic goop that evolved into or influenced some of the best Punk and New Wave bands, ever. (Like Dead Boys, Pere Ubu, and Pagans).

The Mirrors wear the Velvets’ influence well, with some songs tending to the slower, lo-fi, jangly side—more Loaded-era VU—and others mining arty, experimental depths. While they were around, the Mirrors had a 40-minute freakout jam called “Sweet Sister Ray” which they said was a sequel to VU’s “Sister Ray.” That one’s not included on the album. It’s probably a song better experienced live, and possibly best experienced under the influence.

At the same time, early Syd Barret-styled Prog Rock can be heard creeping through some of the songs. It’s a less freaked out sound, but still noodles through some killer, exploratory guitar riffs. The Mirrors also nail the basic, essential garage rock pounder.

As disparate as all that sounds, the Mirrors’ sound has the singular, syncopated roar of a Ford 355 engine (known as the Cleveland).

Not as bent as the Electric Eels (“I’m So Agitated!”), nor as throttling as Rocket from the Tombs, the band filled a void among the Cleveland pre-punk scene. It’s a sound that at the time was slowly crawling up through the cracks of music, as heard in other obscuro-bands like Simply Saucer (Canada), the Twinkeyz (Sacramento), or X_X (featuring former Mirrors members). But it showed up in less obscure bands, too—like the Modern Lovers (led by Jonathan Richman) and Red Krayola.

This 15-song album collects the two Mirrors songs originally released in 1977 as a 7″ on Hearthan records, in addition to tracks from the incredible Those Were Different Times compilation of Cleveland pre-punk (Scat Records), and material from the Hands In My Pocket CD (Overground Records). Everything was recorded during the Mirrors brief apex, 1974/75.

Make no mistake, the new, vinyl-only Mirrors reissue on Violet Times is a record nerd’s record: a beautifully packaged, limited, vinyl-only release, by a band time forgot. It shouldn’t have to be that way.