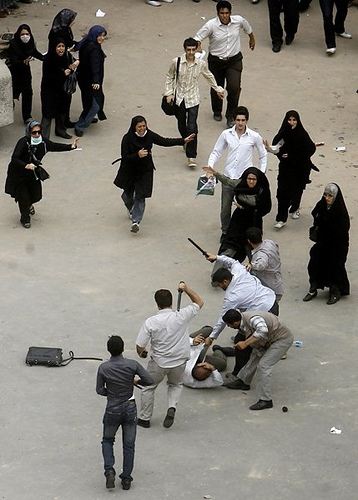 In the wake of continuing mass protests over Friday’s elections that many reasonable people have concluded were stolen, the resolve of the Iranian powers that be seems to be faltering. Reversing his earlier proclamations calling President Mahmoud Ahmadinejad’s win a “divine assessment,” Ayatollah Ali Khamenei, Iran’s supreme leader, has called for an investigation into the results. PressTV, the Iranian state-run television network, is now covering the protests sympathetically. You may think that the call for an investigation is just a sop to protesters. But the change in state television coverage is certainly relevant. Via Laura Rozen, we hear this:

[The National Iranian American Council’s] Trita Parsi told NPR’s Washington affiliate Monday he thinks the momentum is starting to shift in favor of those contesting the elections results. Among the signs: the Guardian Council said it would delay certification for ten days, and Khamenei’s order for an examination of the elections results seeming to relax police crackdown on demonstrators that had been occurring. The ultimate outcome is uncertain at this point, Parsi said.

At this stage, uncertainty is good news. It’s definitely better than the certainty of an Ahmadinejad re-election. David Corn worries that Iran may only have half an opposition. If that’s right, we’re about to see how far half an opposition can go.